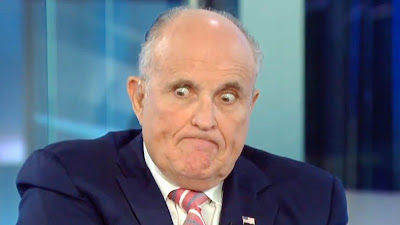 Reptilian hack and Trump's inept hatchet man Rudy "Ghouliani" Giuliani has been scurrying around the halls of the Ukrainian government recently, trying to dig up dirt on former VP Joe Biden and his son Hunter with no luck. There is also reason to believe he's been pressuring the Ukrainians to manufacture some dirt in return for the release of $250 million in military aid on behalf of Russian asset and sociopath Donald "The Chosen One" Trump, who is holding up the aid that would deter Russia's aggression. Nothing that Trump's servile weasel would do these days should surprise us, but on this anniversary of the 9-11 attacks, we should remember the 9-11 backstory involving Giuliani.

In 1998, the NYPD produced a report that opposed the placement of its emergency operations command center in Seven World Trade Center. The World Trade Center (WTC) truck bombing in 1993 convinced New York City's police and public safety leadership that the WTC would be the primary target of another terrorist attempt, and therefore a bad choice for the city's emergency operations center. Giuliani overruled them. When the 9-11 attack occurred, the emergency operations command center in Seven World Trade Center was knocked out, which is the reason we saw Giuliani wandering the streets in the aftermath with a walkie-talkie and a mobile command center. Speaking of walkie-talkies, it was Giuliani who failed to get the FDNY proper communications equipment over many years, which led to the loss of life among the first responders on 9-11. America's (shittiest) Mayor!

Today, Giuliani weirdly tweeted out an anti-Antifa ad by a clothing company that appeals to military members, with the not-so-subtle message that we need to fight the people who are opposing fascism. Seems in character with Giuliani, given that he doesn't want to get into his failure on 9-11 and his neo-fascist master has threatened to identify Antifa as an "organization of terror." A twofer for this odious hack.
Posted by Hackwhackers at 5:00 PM