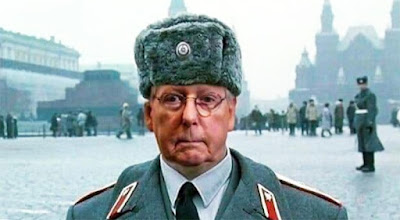 As one would expect, Sen. "Moscow Mitch" McConnell is setting up for a quick fix on the likely impeachment of fellow Russian asset Donald "Rump" Trump:


“Under the Senate rules, we’re required to take it up if the House does go down that path, and we’ll follow the Senate rules,” McConnell said. “It’s a Senate rule related to impeachment that would take 67 votes to change.” [snip]

He said, however, that, “how long you’re on it is a whole different matter.”

A day? An hour? A minute?  We'll see how long a Republican cover- up in the Senate takes.

Turns out Moscow Mitch is focused on more important things, saying with all the smarmy cynicism he could muster:


“What I want to do is spend our time accomplishing things for the American people."

Like blocking gun control legislation, taking away health care from millions, giving more tax cuts to the rich, keeping our elections vulnerable to Russian interference...  yeah, we know.  Fuck you -- with a balalaika.