The "Cease Fire" That Wasn't 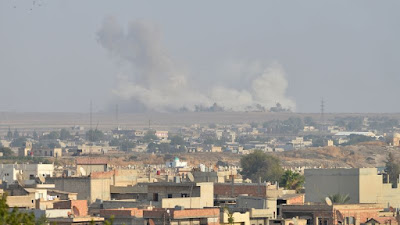 Yesterday, after hearing from his ass-kissing yes man VP Mike "Dense" Pence in Ankara, Turkey, demagogue and pathological liar Donald "Impeachable Me" Trump bragged that he'd struck a great deal with Turkish authoritarian Recip Erdoğan for a "ceasefire," calling the deal "an amazing outcome."  Literally within minutes of his lying boast, the Turkish foreign minister denied that Turkey had agreed to a cease fire, merely a "pause" in their onslaught to allow Kurds to abandon their homes in Syria.

Today, as if to illustrate that point, Turkey launched air strikes on Bab al-Kheir in northern Syria, killing five Kurdish civilians. The town of Ras al-Ayn also came under fire from Turkish forces after the pause was announced. Thus, Trump engaged in the second betrayal of the Kurds in a matter of days, allowing Turkey time to conduct an ethnic cleansing of Kurds in the border area between Turkey and Syria. After Turkey has now shown him to be a clueless weakling, full of hot air and ignorance, Trump has no choice but to pretend that our Kurdish allies are "no angels" as they are swept up and discarded, much to the delight of Assad, Iran, and most importantly Moscow.

(photo: Smoke rises over Ras al-Ayn, Syria as Kurds come under attack from Turks after "ceasefire" was announced)
Posted by Hackwhackers at 3:30 PM

Labels: Turkish cease fire against Kurds proves to be false