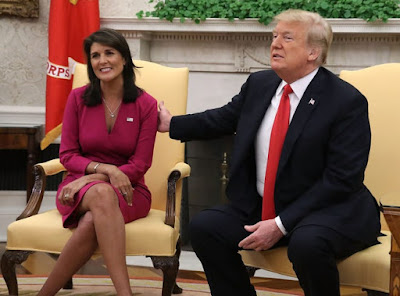 Opportunistic former U.N. Ambassador and Trump toady Nikki Haley continued her cynical self-abasement book tour today on NBC's Today show. Host Savannah Guthrie asked Haley whether pathological liar and sexual predator Donald "Impeachable Me" Trump was truthful, among other things. Watch here and gag as this ambitious, amoral hack responds with a straight face that she's always found him to be truthful. The fact checkers at the Washington Post may beg to differ with Haley: they've counted almost 13,500 lies by Trump as of last month since he took office.

Of course, Haley knows that Trump lies constantly, but she doesn't care because she has her eyes on joining the Trump ticket as Vice President. She's obviously hoping that Trump removes his wooden, glorified valet Mike "Dense" Pence from the ticket in order to attract alienated female voters in 2020. Failing that gambit, by proving her Trumpist loyalty now, she's ready to run in 2024 as a preserver of the toxic Trumpian political brand. Rethugs that get in the way of this calculating Sarah Palin-with-"smarts" should make sure that their insurance policies are paid up.


As for Haley, she has now signaled to Trump Republicans that she was not a part of the “deep state,” thus clearing away a barrier to ambition. All she had to do was to ignore her conscience, betray her colleagues and injure her country. A small price to pay for such a brilliant political future.


(photo: Flashing some leg and cleavage to please her predator boss: check! Mark Wilson/Getty Images)
Posted by Hackwhackers at 11:00 AM