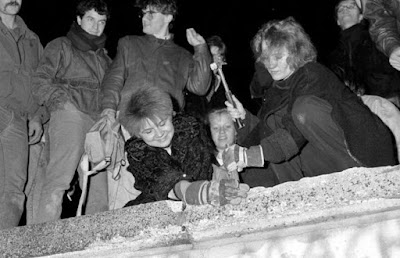 “The Berlin Wall, ladies and gentlemen, is history and it teaches us: No wall that keeps people out and restricts freedom is so high or so wide that it can’t be broken down.” -- German Chancellor (and default leader of the free world) Angela Merkel, speaking earlier today at ceremonies celebrating the 30th anniversary of the Berlin Wall coming down. Before the union of East and West Germany, Merkel had lived in East Germany and knows of which she speaks.

It's also worth contemplating her comments in the context of sociopathic bigot Donald "Rump" Trump's mania about his Medieval vanity wall (that Mexico was going to pay for), and his deep affinity to Russia and its thuggish ruler, Vladimir Putin. Unlike his contemplated trip to kowtow to Putin next May, this ceremony in Berlin would have been one worth attending, but the Alabama - LSU game took precedence.


On the 30th anniversary of the fall of the Berlin Wall, Berliners are sending part of the wall to Trump “to commemorate the United States’ dedication to building a world without walls.”

Labels: quote of the day, Thirtieth anniversary of Berlin Wall coming down