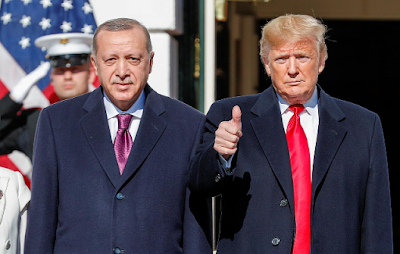 Somewhat overlooked while yesterday's impeachment inquiry hearings proceeded, the autocrat of Turkey, Recip Erdoğan, paid a visit to his pupil, would-be autocrat Donald "Rump" Trump at the White (Supremacist) House. Trump did his best to flatter the brutal Erdoğan and gaslight everyone, at one point saying:


“I think the president has a great relationship with the Kurds. Many Kurds live currently in Turkey, and they’re happy and taken care of, including health care and education and other things.”

"Taken care of," in the removal sense, that is. This is after Trump betrayed our longtime Kurdish allies in Syria by giving Erdoğan the go ahead in his ethnic cleansing of Kurds along the border with Turkey.  To demonstrate that he cares so much about the Kurds, Erdoğan showed  a propaganda video showing the Kurds as terrorists to a gaggle of Senate Republicans called up to the White (Supremacist) House to hear his pitch.  "Great relationship," like a wolf to sheep.

An insight into Trump's motivation in embracing Turkey was provided recently by neocon pistol- packer John Bolton, who told a private group in Miami that there is a business or personal relationship guiding Trump's approach to Turkey, overriding U.S. interests.

If his kissing up to Erdoğan by lying about his brutal "relationship" with the Kurds isn't clear evidence of that, then nothing is.

(photo: Reuters. The Kurds can tell you where to stick that thumb.)
Posted by Hackwhackers at 11:00 AM