Anti-Media Attacks Are Working For Trump 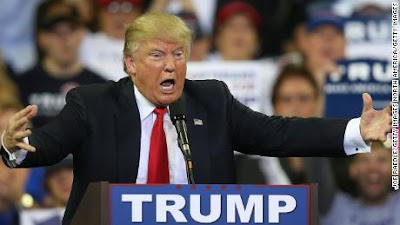 The latest poll from the Pew Research Center demonstrates that demagogue and pathological liar Donald "The Dumb Don" Trump, and his party, have succeeded in largely brainwashing their most devoted supporters into mistrusting the press.


"About three-in-ten Republicans and Republican-leaning independents (31%) say journalists have very low ethical standards, roughly six times the 5% of Democrats and Democratic leaners who say this. Trump’s strongest approvers, though, express even greater suspicion: 40% of Republicans who strongly approve of Trump’s job performance say journalists’ ethics are that low."

It's pathetic to see that hardcore Trumpists see "very low ethical standards" in the media, but not their cult leader, whose fraudulent acts, like profiting off of a fake charity and a fake university, are plain to see. Trump's long campaign of convincing these voters to disbelieve their lying eyes is reinforced by right-wing propaganda pushed through their media outlets, isolating a segment of the population from factual reports and news.
Posted by Hackwhackers at 4:00 PM

Honestly, I'm about ready to give up on the Trump cult members. I'm sure there's a cutoff between actual rabid believers, like a solid twenty percent of people who honestly believe everything he says. But I believe there's another fifteen to twenty-five percent who just like backing a bully and they don't actually believe his bullshit. They just like to see the Republican party run roughshod over the rules.

In any case, we aren't going to persuade the hardcore cultists. They'll go to their graves believing Trump was actually the Chosen One. But we cannot just shrug our shoulders and give up trying to shine the light on his corruption, cruelty, and criminal acts. Not just his, but the entire Republican party, who have sold their shabby souls for his power.

November seems like a century away, but it will be here before we know it. Organizing, reaching out, and working at every level to motivate voters will be our goal next year.

donnah -- We have the same views about the hardcore of his supporters, usually broken down into "support" and "strongly support" in the polls we've seen. The latter are unreachable. We hope the Dem primaries are resolved fairly quickly so that we can focus on supporting one candidate. Then the hard work of organizing, reaching out, etc. as you have laid out. After the blue wave of 2018, we want tsunami to sweep away this vile man next year.