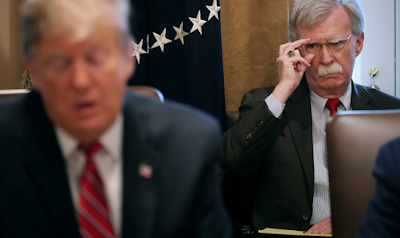 The New York Times got its hands on the draft manuscript of former National Security Advisor John Bolton's upcoming book, which confirms that crime family boss Donald "I Want You To Do Me A Favor, Though" Trump tried to extort Ukraine into announcing an "investigation" into the Bidens:


President Trump told his national security adviser in August that he wanted to continue freezing $391 million in security assistance to Ukraine until officials there helped with investigations into Democrats including the Bidens, according to an unpublished manuscript by the former adviser, John R. Bolton.

The president’s statement as described by Mr. Bolton could undercut a key element of his impeachment defense: that the holdup in aid was separate from Mr. Trump’s requests that Ukraine announce investigations into his perceived enemies, including former Vice President Joseph R. Biden Jr. and his son Hunter Biden, who had worked for a Ukrainian energy firm while his father was in office.

Mr. Bolton’s explosive account of the matter at the center of Mr. Trump’s impeachment trial, the third in American history, was included in drafts of a manuscript he has circulated in recent weeks to close associates. He also sent a draft to the White House for a standard review process for some current and former administration officials who write books.

Between the revelations coming from former Rudy "Colludy" Giuliani's "associate" Lev Parnas and this, hopes that the rotted- out Republican leaders in the Senate and Trump's band of bumbling lawyers may have had of shutting the impeachment trial down without one of many un- exploded "hand grenades" going off in their laps are gone.  We hear Sen. Susan Collins is very concerned.

I hate politics. I hate this environment of lies, cheating, and bullying. It enrages me that this president and his corrupt administration have been able to continue to commit crimes and diminish our democracy for so long without facing penalties.

The Trump team has had the Bolton information all along. Of course, they already knew that Trump committed crimes because he always has, and the fact that we can't get the truth out there drives me crazy. It's an non-secret secret that Trump's guilty of countless crimes and the Republicans will keep stonewalling and blocking the information.

What also bugs me is that the leaked Bolton story will be bulldozed, too. And everyone knows what he said and knows Trump is flat-out guilty, but the “defense team” will deny and disparage it. Bolton is going to get slammed, which I don't care about, but it proves that the party will eat its own in defense of their cult leader.

I hope Bolton's book flops before it even hits the bookstores.

donnah -- agree. No matter what comes out, Republicans will find a way to distract, excuse and move on as quickly as they can.