The Washington Post's Margaret Sullivan writes about the two "big stories" recently dominating mainstream media reporting, only one of which merits the coverage -- one being the "feud" between Sens. Elizabeth Warren and Bernie Sanders and the other being the latest revelations of Trump's knowledge and participation in the Ukraine shakedown scandal.  We know which was the more important, by far, to the health and survival of our democracy.  But, as Sullivan notes, the lack of a sense of proportion is missing, as it often is in news coverage involving the historically corrupt, venal and dangerous Trump regime.  The default for the media is to normalize Trump's abnormalities, as reporting on his crazed Nuremberg rallies has proven.

This lack of truth and proportion is, Sullivan writes, something Trump (and his rotted- out party) depends on:

The widespread lack of news literacy and basic civics is something that Trump depends upon. (“I love the poorly educated,” he crowed in early 2016 after winning the Nevada primary.) Or as Ohio-based columnist Connie Schultz wrote recently: “Nothing scares Trump more than informed voters.”

The mainstream news media may not see the obligation to break through citizens’ lack of knowledge.

They may not see their role as educating, or getting across what’s important but complicated in an understandable, clear way.

This was true most recently in the 2016 election cycle, with "reporting" in the New York Times and Sullivan's own WaPo throwing proportion out the window in covering the nothingburger "scandal" of Hillary Clinton's email server, while Trump's glaring, disqualifying flaws were shoved to the background.  The asymmetry was widespread in the media (click on image to enlarge): 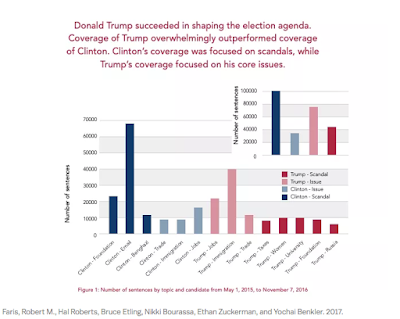 None of this is new and none of this will go away in 2020.  The distractions will be different, of course, but the media will be played (and go along with it) because, as pointed out above, it's more profitable "to play to people's prejudices or lowest instincts."  Even when the media is reporting on Trump's criminality and incompetence, it's often well after the fact (and sometimes as a result of a book deal, as Tengrain notes with the "Very Stable Genius" book by WaPo reporters, revealing events from 2017 that they sat on until they could be teased out to goose book sales).

Although we hate to close with a tweet from a former Bush assministration flunky turned Never Trumper turned independent, this reproach on how the media allows liars to operate is right on --


News media should not have balance as a standard. Truth should be the standard. And if someone takes you further from the truth they should not be given a platform.
— Matthew Dowd (@matthewjdowd) January 16, 2020

Sullivan says the public needs the media to do much better.  Don't count on that happening.  Change will be up to us.

The inadequacy of letting the media decide what public policy and politics we talk and think about is so obvious and has been so widely recognized by all but those who benefit from that inadequacy, that I think it's a waste of time at this point to keep pointing out the problem and complaining about it.

It's long past time for politicians to reclaim control of what the nation talks and thinks about public policy. It's easy enough to describe how they would do this, which would be to just start saying clearly what public policy they think we should have. But when I give this example, you will see why this would be hard to do, as easy as it is to describe, and why they won't risk doing it.

A D politician, for example, could get all sorts of attention and free media, could take back control of the discussion of immigration, by coming out for amnesty and open borders. Not total and categorical under either heading, but pretty much at least sub-total amnesty for almost all the undocumented, plus borders open to economic migration. I don't know any Ds who aren't for subtotal amnesty in practice, for that "pathway to citizenship" verbiage we hide behind because we don't want to try to seize back the definition of the issues and the vocabulary to talk about those issues from the Rs. Opening the border to economic migration is admittedly more problematic, because fears of competition from folks willing to work for less is not an obviously foolish concern. It is a foolish concern, but getting people to accept fact that would have required us to have not given in to supply side fundamentalism as the unchallenged way of thinking about economics in our political culture.

It is not normal, natural, or even, in the long run minimally sustainable, to have the media be the arbiters of our political culture. They only sit on that throne for the moment because our side has been too timid to fight the fights that need to be fought to remain in control of what we talk and think about public policy. We're not going to win all those fights, but we are 100% guaranteed to lose every fight we refuse to engage in.

Glen -- we generally agree with you, and your points are well-taken. We're simply pointing out, as Sullivan and other writers do, that it seems to us the place to start is to see that lies and liars aren't given free platforms to drown out, misinform and poison the culture in the competition for peoples' attention. That would be the Bannon/Trump game plan of "flooding the zone with bullshit" that worked for them in 2016, and that the media enabled.