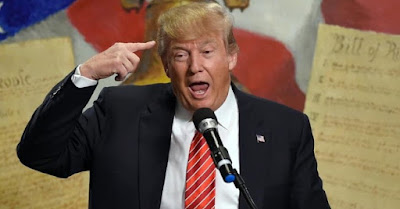 Now that Senate Republicans have given nitwit authoritarian Donald "Impeached Forever" Trump  the green light that he'll not be held accountable for anything he did or does, the truth is confirmed:


Emboldened after his impeachment acquittal, President Donald Trump now openly admits to sending his attorney Rudy Giuliani to Ukraine to find damaging information about his political opponents, even though he strongly denied it during the impeachment inquiry.

The reversal came Thursday in a podcast interview Trump did with journalist Geraldo Rivera, who asked, "Was it strange to send Rudy Giuliani to Ukraine, your personal lawyer? Are you sorry you did that?" Trump responded, "No, not at all," and praised Giuliani's role as a "crime fighter."

"Here's my choice: I deal with the Comeys of the world, or I deal with Rudy," Trump said, referring to former FBI Director James Comey. Trump explained that he has "a very bad taste" of the US intelligence community, because of the Russia investigation, so he turned to Giuliani.

Trump had previously denied that he sent Giuliani to Ukraine. Asked in November if he directed Giuliani to "do anything" in Ukraine, Trump said, "No, I didn't direct him," but went on to call Giuliani a "great corruption fighter." Giuliani says he's exposing legitimate corruption in Ukraine, even though his claims about former Vice President Joe Biden and his son Hunter Biden have been widely debunked. (our emphasis)

Pathological liars often can't keep their lies straight since they lie all the time.  That, when combined with Trump's increasing loss of already- poor mental capacity, means that if you put a microphone in front of him, eventually he'll cop to the Lindbergh kidnapping (which Republicans wouldn't hold him to account for if he did).

But the additional damage being done to governing norms, the intelligence community and our national security interests -- by Trump persisting in spewing Russian propaganda about the election (along with other members of his rotted- out party) --  is the greater concern.  It's one of many motivators for us to remove this threat and as many of his enablers as possible in November.