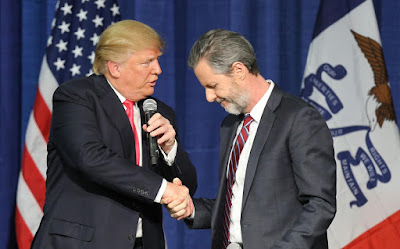 The head of fundamentalist diploma mill "Liberty" University, the execrable hypocrite and pool boy mentor Jerry Falwell, Jr., partially opened his sham college last week, defying public health directives warning against social exposure to COVID-19. He's been one of the COVID-19 deniers, echoing his golden calf Donald "Golden Turd" Trump's original lie that the virus was a "hoax" by Trump's enemies to bring him down.

Now, there's reporting that Falwell ignored the national advisory and opened the school (the school's head of student health services, "Dr." Thomas Eppes, Jr. should lose his medical license over this decision, too):


“'We’ve lost the ability to corral this thing,' Dr. Thomas W. Eppes Jr. said he told Mr. Falwell. But he did not urge him to close the school. 'I just am not going to be so presumptuous as to say, "‘This is what you should do and this is what you shouldn’t do,’” Dr. Eppes said in an interview.

So Mr. Falwell — a staunch ally of President Trump and an influential voice in the evangelical world — reopened the university last week, igniting a firestorm. As of Friday, Dr. Eppes said, nearly a dozen Liberty students were sick with symptoms that suggested Covid-19, the disease caused by the virus. Three were referred to local hospital centers for testing. Another eight were told to self-isolate." (our emphasis)

The sheer stupidity and recklessness of these men is breathtaking; that Eppes doesn't think he has the responsibility to tell Falwell "this is what you shouldn't do" from a health perspective is beyond belief. Of course, it's very likely that Eppes was just reading Falwell for an answer.

Let's hope that some smart attorneys start legal action against "Liberty" University, and Falwell in particular, for reckless endangerment, etc. Reactions on Twitter were predictably strong:


This story almost makes me wish I was still a trial lawyer. To the hard working process servers who will soon be calling on Jerry Falwell Jr.: remember to maintain 6 feet of social distance. https://t.co/u1zPUxcjjG
— Rep. Jared Huffman (@JaredHuffman) March 29, 2020

Lawyer up. Cuz lawyers will be coming. Wonder if insurance will cover it. It’s arguably an intentional act by university for which the injuries could’ve been reasonably anticipated. Mr. Falwell could be personally liable. If it’s deemed intentional, bankruptcy may not help. Hmm. https://t.co/0oY0LY1ogV
— Daniel Mark Extrom (@DanMarkEx) March 29, 2020

It’s rare you see policy outcomes so directly attributable to a decision by one person. But Falwell will be personally responsible for the deaths of several of his students, staff, and faculty. https://t.co/jWbN3ExKeF
— Seth Masket (@smotus) March 29, 2020


Sue Falwell's ass out of existence and shut his diploma mill down for good.

(photo: The Golden Turd receiving a bow from his apostle).
Posted by Hackwhackers at 10:30 AM