Trump Pushes Ahead With Anti-Environment Agenda 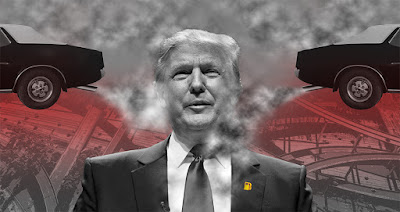 Taking advantage of a nation rightfully distracted by the coronavirus crisis, the Trump regime is continuing its assault on the environment by rolling back auto emissions standards set by the Obama administration:

The White House released the final version of its rules to roll back Obama-era auto emissions standards, taking a critical step toward completing what would be President Donald Trump’s most substantial environmental change since taking office as the novel coronavirus pandemic rages.

The rule, written by the Environmental Protection Agency and the Department of Transportation, would lower fuel economy standards for vehicles sold in the United States from 54 miles per gallon by 2025 to 40 miles per gallon.

The two-digit change carries 10-digit implications for climate change. Under the new standard, which could be implemented as soon as this spring, the U.S. auto fleet would emit nearly additional 1 billion metric tons of carbon dioxide over their lifespans on the road than they would under the existing rule. That’s nearly the annual emissions of Japan, the world’s fifth-largest source of planet-heating carbon dioxide.  (our emphasis)

While the regime modified its even more reactionary original proposal to freeze standards at this year's level, the new standards are another example of the regime's incestuous ties to the industries it "regulates" and to its overall blundering approach.  The Los Angeles Times notes:


Dialing back its original proposal hasn’t made the administration’s problems go away.

The government’s cost-benefit analysis shows that even if the rollback lowers the cost of new cars — as the administration maintains it will — drivers will likely still lose money in the end by having to buy more gas.

And although President Trump has boasted that the new standards will spur economic growth, the administration’s forecasts aren’t remotely sunny. They project car companies could suffer a loss of thousands of jobs by making dirtier cars that would be locked out of many overseas markets.  (our emphasis)


Of course, the focus isn't on whether the average consumer will benefit in the end from cleaner air, global climate change abatement, or having more money in their pockets.  It's about the Republican donor base, as it always is.

The greed and short- sightedness of the auto and oil and gas industries matches that of the Trump regime and its cadre of 4th raters and ideologues.  It's a recipe for environmental disaster, and reason number infinity that these vandals and crooks need to be kicked out in November (if they don't manage to kill us all first).

I think the car makers are smart enough to not spend a lot of money racing to meet these new lowered standards... at least not until they see what the next administration has in mind.

bluzdude -- both articles indicate the auto makers are divided, with one camp pushing the Trump regime to roll back the standards, and another supporting the stronger standards (their relative positions probably depend somewhat on how much they've invested in R&D and re-tooling in the past 3 years, and not necessarily to being altruistic). But, your point is well taken: the election is only months away, so why jump the gun.