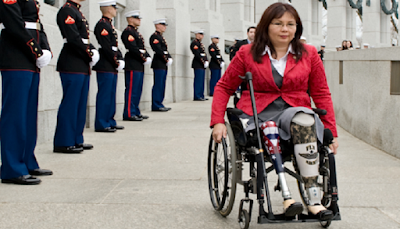 "Donald Trump also threatened to exploit the most powerful military on the face of the earth, disrespecting our troops in the process, in order to do it. To then see the Secretary of Defense, a West Point graduate who swore to never ‘lie, cheat, steal, or tolerate those who do’ and the Chairman of the Joints Chiefs of Staff walking like lapdogs behind a five-time draft dodging coward who is more interested in looking like a leader than actually being one sends a horrifying message to our troops—including our black and brown troops—that our military’s leaders will not protect them from unlawful orders.

We cannot allow any Commander in Chief to use our active-duty servicemembers to silence our neighbors. To drive yet another wedge between Americans. We cannot allow any Commander in Chief to put our Armed Forces’ reputation as the last institution Americans can trust and respect at risk by using them unlawfully and putting them in a position of exacerbating the divisions driving our union apart. Tear-gassing peaceful protesters is not leadership, it’s cowardice. Threatening military force and imprisonment against Americans exercising their Constitutional rights is not Presidential, it’s tin-pot dictatorial." (our emphasis) -- Illinois Sen. Tammy Duckworth, a wounded, decorated Army combat veteran serving her first term as U.S. Senator, reacting to Trump's exploitation of the military for his political purposes. Full statement here.

Sen. Duckworth has been one of the most outspoken and colorful critics of Trump, often referring to him publically as "Cadet Bone Spurs."  Here, she not only shreds him, but also the cowardly lapdogs who surround and facilitate his sick behavior. We like her immensely.
Posted by Hackwhackers at 1:30 PM

Labels: Quote of the Day II, Sen. Duckworth responds to use of military to quell George Floyd demonstrations

I thought Senator Duckworth was a bit of a lightweight when running for office and first elected. She sure has grown into the job very well. Gotta love the precedent of her voting on the Senate floor with her baby in her arms.

Senator Duckworth has more courage and integrity than Trump could even imagine. He will never measure up.

donnah -- I'm so glad that she's taking Trump on in a visceral way that people can identify with.

This wouldn't be the first time.
Back during mining strikes in Idaho the gov. specifically ordered a unit of "Buffalo Soldiers", composed of Black soldiers, so as to use them as strike breakers against white strikers to inflame further racism in the miners.