Why Honor These Traitors? 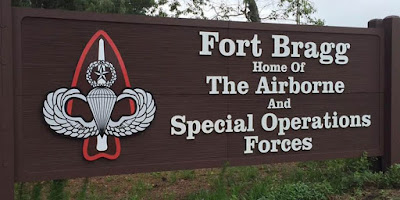 The announcement that the Army will consider changing the names of the 10 Army facilities named after Confederate generals is just a first step. Knowing bigot and demagogue Donald "Very Fine People" Trump has a virtual "veto" on the decision, we can't get too optimistic.

Coming as the country confronts, once again, the prevalence of racism in our institutions, the naming of U.S. military bases after men who took up arms against the U.S. and led armies that killed thousands of its troops in defense of slavery has drawn renewed focus. From Ft. Bragg to Ft. Hood, the names of those generals attached to U.S. military facilities is almost akin to conferring the same honor on Gen. Erwin Rommel or Gen. von Rundstedt of Nazi Germany. Writing in The Atlantic, even former Gen. David Petraeus joins in the call to rename them:


"Confederate memorialization is only the most obvious expression of formerly acceptable sentiments now regarded critically by many Americans. Once unreservedly celebrated figures like Thomas Jefferson, Theodore Roosevelt, and Woodrow Wilson, to name just three, held convictions and behaved in ways we now find deeply troubling. It is indicative of the complexity of the problem that while the stained-glass window honoring Robert E. Lee in the National Cathedral in Washington, D.C., was removed, that of Wilson, an ardent segregationist, remains (after a healthy debate).

But Confederates leaders are different from these other examples not simply in degree, but in kind: Plainly put, Lee, Jackson, Bragg, and the rest committed treason, however much they may have agonized over it. The majority of them had worn the uniform of the U.S. Army, and that Army should not brook any celebration of those who betrayed their country. [snip]

We do not live in a country to which Braxton Bragg, Henry L. Benning, or Robert E. Lee can serve as an inspiration. Acknowledging this fact is imperative. Should it fail to do so, the Army, which prides itself on leading the way in perilous times, will be left to fight a rear-guard action against a more inclusive American future, one that fulfills the nation’s founding promise." (our emphasis)

A substitute would be to name the forts and facilities after Medal of Honor winners, who are infinitely more deserving of the honor than men who betrayed their own country. Regardless, like the Confederate statues that are being removed from public spaces, the glorification of these traitors who wanted to perpetuate slavery is abominable and needs to end now.

BONUS:  A Navy veteran writes to the Washington Post  (our emphasis) --

I’m a graduate of the Naval Academy and was an active-duty submarine officer until this May. To many people, my time in the Navy defines who I am and what I stand for. I’m proud of the sailors and officers with whom I’ve served, and I’m proud to be a submariner and a Naval Academy graduate.

That is why it’s embarrassing to admit that for four years I attended classes and functions in buildings named for Confederate officers. Maury Hall and the Buchanan House host midshipmen, sailors, officers and guests while tacitly endorsing the white supremacy that the Confederacy stood for. The Navy values diversity and the contributions of sailors of all backgrounds. It is unconscionable that black officers or sailors should be made to feel unwelcome or undervalued.

The Naval Academy should take this opportunity to rename both buildings in honor of one of the many graduates who better represent its values.

The Armed Services as a whole need to reassess their naming practices and do precisely what Gen. Petraeus and Mr. Roy call for.