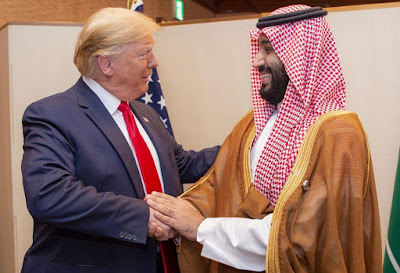 Foreign leaders, from Russia's Putin to France's Macron and beyond, sized up malignant narcissist and ignoramus Donald "Tovarich" Trump early on: he was a fool who could be bought off by flattery and parades in his honor. As long as a foreign leader, no matter how corrupt or anti-American (e.g. Kim Jong-Un), said "nice" things about him and gave him spectacular photo ops, Trump was their best friend.

Among the first to capitalize on Trump's weakness was the sinister and violent leader of Saudi Arabia, Crown Prince Mohammed "Bone Saw" bin Salman. In a book to be released tomorrow, "Blood and Oil: Mohammed bin Salman's Ruthless Quest for Global Power," authors Bradley Hope and Justin Scheck describe the elaborate machinations that Bone Saw and his United Arab Emirate client state lackeys used to ingratiate themselves to Trump and his corrupt son-in-law Jared "Mr Ivanka Trump" Kushner. From an advance excerpt from their book, they describe the meeting planned by Bone Saw:


"Only months on the job, the upstart prince [Bone Saw] had figured out exactly what to do to get Mr. Trump’s attention: big deals, audacious praise, and treating the elected president of a republic like a visiting king.

White House planners hadn’t understood the point of the meeting with leaders from predominantly Muslim countries in advance; some advised against it. “The Saudis want to do it,” Mr. Kushner told the team.

For everyone else in the room, the leaders from Asia and Africa and the Middle East, the point of the meeting was clear: Saudi Arabia was showing that it was back to being the U.S.’s chief ally in the Islamic world, and the man responsible for reviving the relationship was Prince Mohammed, also known by his initials, MBS. It was an overarching theme of the presidential visit and the foreign policy agenda of Mr. Trump’s presidency. Ignoring the recommendations of career diplomats, he’d forged ahead with the plan looking for some early international wins.

What he got instead was headlines about arms sales and the rise of an authoritarian Saudi prince with ambitions to not let his country be bossed around—including by the United States." (our emphasis)

All the trappings were laid out by Bone Saw for the narcissistic Trump, from lavish banquets and extravagant gifts to promises of arms sales and trade so Trump could claim a foreign policy "victory." What Bone Saw got was the U.S.'s stamp of approval to purge his domestic rivals and engage in liquidating his enemies on foreign soil.

If the excerpt is any indication, the book will rip the hide off of Bone Saw and demonstrate once again how cheaply Trump can be bought off with a parade, flattery, and some expensive trinkets.

Labels: Book illustrates how Saudis played Trump to their advantage