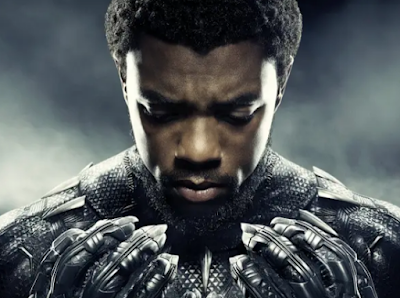 If  "courage is grace under pressure," actor/ writer/ producer Chadwick Boseman was a star in that regard, too:

Boseman died at his home in the Los Angeles area with his wife and family by his side, his publicist Nicki Fioravante told The Associated Press.

Boseman was diagnosed with colon cancer four years ago, his family said in a statement.

“A true fighter, Chadwick persevered through it all, and brought you many of the films you have come to love so much,” his family said. “From Marshall to Da 5 Bloods, August Wilson’s Ma Rainey’s Black Bottom and several more - all were filmed during and between countless surgeries and chemotherapy. It was the honor of his career to bring King T’Challa to life in Black Panther.” (our emphasis)

He hadn't spoken publicly about his diagnosis for four years, while he pursued his acting and other creative pursuits. Think of that:  working on multiple projects for years while silently fighting for your life every day, through chemotherapy and surgeries.

Ironically, he passed away on MLB's Jackie Robinson Day, an icon he portrayed in the 2013 movie "42."  Rest in power.


The true power of @ChadwickBoseman was bigger than anything we saw on screen. From the Black Panther to Jackie Robinson, he inspired generations and showed them they can be anything they want — even super heroes. Jill and I are praying for his loved ones at this difficult time.
— Joe Biden (@JoeBiden) August 29, 2020


Good that he saw this happen before he passed:

What a shame to lose such a bright, talented and generous young man. He shone like a star and he will truly be missed.

donnah -- yes, it's always a tragedy when someone dies so young and with so much potential ahead.