"His" Military Won't Be Voting For Trump 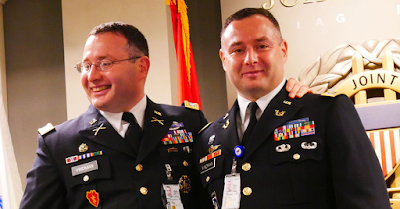 Active- duty military don't care much for their "Commander in Chief," Cadet Bone Spurs, and the officer corps, in particular, strongly disapproves:

In the latest results — based on 1,018 active-duty troops surveyed in late July and early August — nearly half of respondents (49.9 percent) had an unfavorable view of the president, compared to about 38 percent who had a favorable view. Questions in the poll had a margin of error of up to 2 percent.

Among all survey participants, 42 percent said they “strongly” disapprove of Trump’s time in office. [snip]

Among active-duty service members surveyed in the poll, 41 percent said they would vote for Biden, the Democratic nominee, if the election was held today. Only 37 percent said they plan to vote to re-elect Trump.  [snip]

The splits between officer and enlisted views within the poll are notable. More than 59 percent of officers said they have a poor view of the president, with more than half saying they strongly disapprove.

Among enlisted respondents, 47 percent said they have an unfavorable view, and nearly 39 percent a favorable view. Enlisted views of Trump’s performance in office have consistently been more favorable than those of officers in the poll over the last four years.  (our emphasis)

The military, traditionally one of the more conservative sectors of any society, is also laying down a marker in the form of Joint Chief of Staff Chairman Mark Milley, who provided written confirmation that the Armed Forces won't be a party to any Cadet Bone Spurs coup attempt when he loses the election.  They take an oath to defend the Constitution, not Cadet Bone Spurs.  Of course, many retired brass have spoken out against Cadet Bone Spurs (Gens. Mattis, Kelly, Allen, McCaffrey, McChrystal, Dempsey, Clark, and Adms. Mullen, McRaven, Green, etc.) The fact that so many of them are appalled by what's going on in this country and are going to vote their consciences is somehow very encouraging.  When the time comes, they need to step up with the rest of us to make sure Cadet Bone Spurs doesn't steal this election and everything they swore an oath to defend along with it.

Interesting. As you say, Trump can forget about military support for a coup attempt, if both the leadership and the rank-and-file is leaning against him.

Infidel -- it appears to be at least one institution Trump hasn't managed to destroy or corrupt.