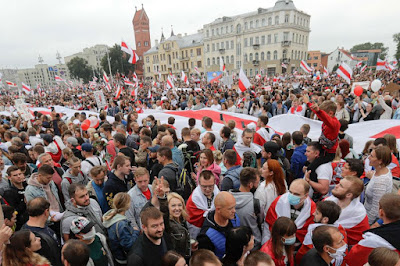 The embattled dictator of former Soviet state Belarus, Alexander Lukashenko, got a happy birthday call today from his fellow thug, Russian autocrat Vladimir Putin, as a show of support as pro-democracy demonstration continue. Putin reportedly invited Lukashenko to Moscow for mettings, aimed at subduing the unrest and expanding Russia's influence over it's closest former-Soviet ally. Lukashenko rigged the August 9 elections and spurred massive demonstrations across Belarus, which continued today in its capital Minsk.

While Belarus' strategic importance to Russia is that it creates a buffer with Poland and other NATO countries, Russia has long coveted its former Soviet republic, as Putin dreams of a Greater Russia that would absorb its former Soviet neighbors. A closer embrace between the countries is clearly on Putin's mind and agenda:


"In the biggest sign yet of Russia’s willingness to intervene to prop up Lukashenko, Putin said on Thursday the Kremlin had set up a 'reserve police force' at Lukashenko’s request, although it would be deployed only if necessary."

You'll recall that Putin illegally invaded Crimea and eastern Ukraine (Donbass) after his puppet Viktor Yanokovych was toppled in the "Euromaidan Revolution" in 2015 on the pretext of protecting "ethnic Russian" people from oppression. His troops in eastern Ukraine -- wearing no insignia -- continue to hold ground against the government of Ukraine. Putin may be worried that his friend Lukashenko might suffer the same fate, and he's prepared to send in Russian troops -- "invited" of course -- to Belarus to prevent democracy from breaking out once again.

(photo: Protests in Belarus one week ago. Sergei Grits/AP)

With parts of Siberia already chaffing under the putin regime, weak economy, plus more and more people willing to go out in the streets against putin does he think trying to grab another population ( Belarus) that is opposed to russian interference and is already in the streets would enhance the security of his regime?

Anon. -- He'd be willing to send forces in if he believes Lukashenko's regime will collapse and a Western oriented government were to replace it.