Prince Bone Saw's At It Again 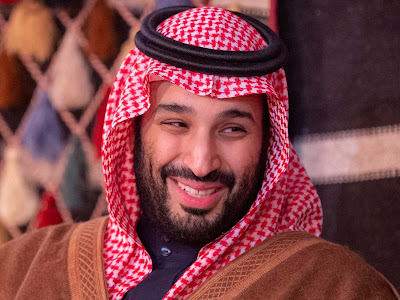 Having faced no real repercussions from the assassination he ordered for journalist Jamal Khashoggi in October 2018 (least of all from his ally, corrupt fraudster Donald "Mango Mussolini" Trump), Saudi Crown Prince Mohammed bin "Bone Saw" Salman has reportedly been gunning for a Saudi official who has incriminating information against him regarding the assassination. Former intelligence official Saad al-Jabri currently resides in Canada, and was targeted by Bone Saw not long after Khashoggi's murder because of his knowledge of the Saudi intelligence apparatus that's controlled by the Crown Prince. That plot to murder al-Jabri failed after Canadian border guards became suspicious of the hit team when they attempted to enter Canada at the Toronto airport.

In a complaint filed by al-Jabri's attorneys, Bone Saw is accused of dispatching the assassination team  in a effort to silence him:


"Mr Jabri says this is down to him possessing 'damning information'. The document says this includes alleged corruption and overseeing a team of personal mercenaries labelled the Tiger Squad.

Members of the Tiger Squad were involved in the murder of dissident journalist Khashoggi, who was killed inside the Saudi consulate in Istanbul in 2018, it says.

After fleeing Saudi Arabia ahead of a purge by the all-powerful crown prince in 2017, Mr Jabri fled to Canada via Turkey.

He alleges Mohammed bin Salman made repeated efforts to return him to Saudi Arabia, even sending private messages, including one that read: 'We shall certainly reach you'." (our emphasis)

When Bone Saw displays the chilling, thuggish arrogance of reaching beyond his borders to kill his opponents, he places himself above the law. That may work in his corrupt feudal kingdom, but he needs to be taught the rest of the world won't tolerate his international criminality.

Why does he wear a tablecloth on his head? Surely he can afford sumin' more "Princey".
Sorry, I'm in a "mood" !