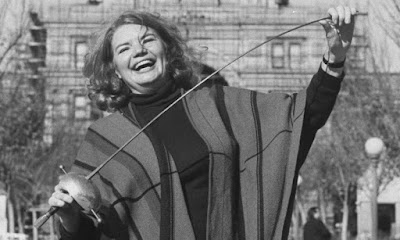 The legendary progressive populist journalist, humorist and author Molly Ivins, who passed away in 2007, would have been 76 today. Ivins started out as a police reporter at the Minneapolis Tribune, and later wrote for both the Dallas Times Herald and the Ft. Worth Star-Telegram. Her column was carried by hundreds of newspapers, with right-wing blowhards the usual target of her rapier wit (thus the photo above). Some of her broad wisdom is captured in these few quotes from her:

"It is possible to read the history of this country as one long struggle to extend the liberties established in our Constitution to everyone in America."

"The thing about democracy, beloveds, is that it is not neat, orderly, or quiet. It requires a certain relish for confusion."

"What you need is sustained outrage...there's far too much unthinking respect given to authority."

Her voice is missed even more today.

(photo: Mark Perlstein/Getty)
Posted by Hackwhackers at 9:00 AM

Something special when she joined Al Franken on Air America back in the day.

Very gratified to see someone else misses her dearly. I fantasize almost daily about what she might have to say about our current leadership.

I miss her wit and wisdom, too. She called 'em like she saw 'em.