Today In Covidiots: The Sturgis Stooges 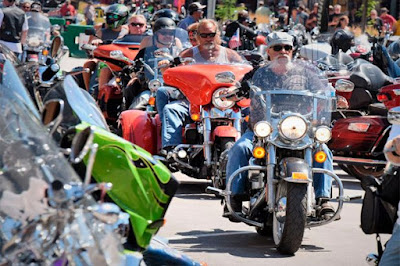 Every year, the town of Sturgis, SD (population approx. 7,000) braces for tens of thousands of bikers who descend on it for perhaps the biggest motorcycle "rally" in the world. Billing itself the "City of Riders", Sturgis has some concerns this year about the bikers massing in their city during the COVID-19 pandemic in a state that has seen new outbreaks recently:


"The mayor of Sturgis says there’s not much to do but encourage 'personal responsibility,' set up sanitation stations and give out masks — though face coverings won’t be required.

Worried residents, however, say officials should have canceled the Sturgis Motorcycle Rally in a state where Republican Gov. Kristi L. Noem resisted stay-at-home orders and mask rules — and last month welcomed another mass event, President Trump’s Fourth of July weekend speech at the foot of Mount Rushmore. A city survey found that more than 60 percent of Sturgis residents wanted the event postponed, the Associated Press reported." (our emphasis)

"Personal responsibility" indeed. The vast majority of the bikers refuse to wear helmets, much less masks, and their favorite activity when not doing wheelies and stoppies around town is filling up with beer in close quarters to each other. In other words, a petri dish for the Trump Virus.

Speaking of sociopath and fraudster Donald "COVID Donnie" Trump, these are mostly his peeps. We'll see if a few thousand cases of the Trump Virus stemming from their rally over the next week will sober them up just a little. Of course, by then it will be too late for the families, friends and health care workers their selfish recklessness has endangered.

So a bunch get sick and croak. I sure as hell don't care.

One Fly...the illness will be more like the drunk driver that kills a family but walks out of the wrecks with a scratch. They'll get sniffles while an exponential number dies

Unfortunately, these bozos will leave the rally and return to their communities in other states, where they will spread the virus around. I hope Kristi Noem is sent a bill for testing and contract tracing from those states. Such a bunch of selfish pricks.

I don't care about these idiots either- it's just sad that some of these fools are going to contract the virus, take it home, and infect the innocent.

And yes I do care about all the others these assholes will infect. Every one of these pricks are pure fucking evil !!

I wish that i wanted a Harley.