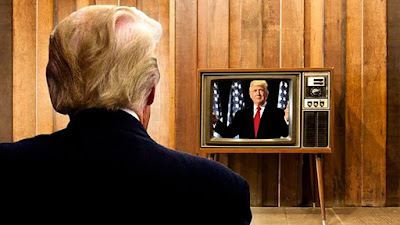 
According to initial Nielsen numbers, President Trump’s speech Thursday night drew 14.1 million viewers across the three broadcast networks and three major cable news networks. That is more than three million fewer viewers than the 17.5 million who tuned in to watch Biden’s speech one week earlier.

When those numbers are expanded out across nine broadcast and cable networks, Biden still beat Trump by a fairly wide margin, 23.6 million to 21.6 million.  [snip]

Biden’s DNC beat Trump’s RNC across the board on all four nights, starting with former First Lady Michelle Obama’s speech on night one, which drew about 18.7 million viewers compared to 15.8 million for Donald Trump Jr., Sen. Tim Scott (R-SC) and others on the first night of the RNC. Night two was closer, but headliner Jill Biden still edged out First Lady Melania Trump, 18.6 million to 18 million.

On night three, Vice President Mike Pence not only lost viewers compared to the previous night but also came in far behind the Democratic vice-presidential nominee Kamala Harris. While approximately 15.7 million viewers watched Pence, about 21.5 million viewers tuned in to Harris.

In fact, while the DNC’s ratings generally grew night by night over the course of the four-day convention last week, the RNC’s numbers appear to have stayed flat or even dropped as the week went on. (our emphasis)

For someone as obsessed with crowd sizes and ratings as COVID Donnie, that's got to leave a yuuge mark.  And to see his wooden running mate, Mike "Dense" Pence, get his alabaster ass kicked by Sen. Harris must give him second thoughts about having kept him on the ticket.  Sad!

The difference in ratings numbers is sure to get under Mr Ratings' thin skin. He's trying to save face by claiming that more Republicans streamed his convention, but really, doesn't that sound like a whiny, weak attempt? He's desperate.