The teenage vigilante killer arrested for the murder of two protesters and the wounding of a third in Kenosha, Kyle Rittenhouse, was a violent cop wannabe whose goal in life was to hide behind a badge in order to maim and murder people he hated. Following his arrest on first degree murder charges, some journalists have been looking into the young psychopath's social media accounts,  and BuzzFeed News came up with this gem. It's a screen grab of Rittenhouse in the front row of a Trump rally in Des Moines, IA on January 30. 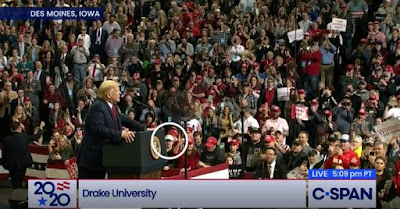 Rittenhouse and the others in the large crowd were absorbing Trump's  rants about "radical Socialist Democrats," "Pocahontas," "fake news," and working with China on the coronavirus (his "friends" then).

Trump has been the instigator of violence dozens of times before. While this rally was months before the killing of George Floyd and the surge in police violence and the Black Lives Matter protests it engendered, it's an example of the people drawn to the reckless, white supremacist demagogue in the Oval Office who's addicted to power and authoritarianism, who has followers ready to grab their guns.
Posted by Hackwhackers at 12:00 PM

Labels: Kenosha vigilante killer was at Trump rally in January 2020

There has always been an undercurrent of racism in Trump's administration, and it has fueled the unbridled anger in groups like White Supremacy mobs, QAnon, and the KKK. It feels like they've gotten bolder and angrier with the support of the president. Trump doesn't bring out the best in this country, he brings out the worst.

donnah -- From the start, with advisors like Steve Bannon and Stephen Miller, then the infamous "very fine people on both sides," Trump identified as a white supremacist. He's aligned with the "alt-Right" movement and they see a sympathetic leader in him.