Surprise no surprise.   The world sees our "emperor" pants- less:


Since Donald Trump took office as president, the image of the United States has suffered across many regions of the globe. As a new 13-nation Pew Research Center survey illustrates, America’s reputation has declined further over the past year among many key allies and partners. In several countries, the share of the public with a favorable view of the U.S. is as low as it has been at any point since the Center began polling on this topic nearly two decades ago.  [snip]

Part of the decline over the past year is linked to how the U.S. had handled the coronavirus pandemic. Across the 13 nations surveyed, a median of just 15% say the U.S. has done a good job of dealing with the outbreak. In contrast, most say the World Health Organization (WHO) and European Union have done a good job, and in nearly all nations people give their own country positive marks for dealing with the crisis (the U.S. and UK are notable exceptions). Relatively few think China has handled the pandemic well, although it still receives considerably better reviews than the U.S. response.

For a confidence man, COVID Donnie doesn't fare well against other leaders, impressively managing to beat out Putin and Xi in the "no confidence" vote (click to enlarge): 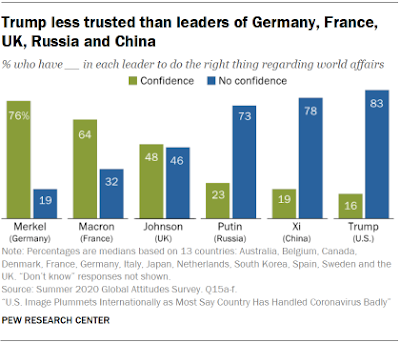 There are many more revealing stats and charts at the link, if more confirmation is needed of the damage COVID Donnie has done to our international standing.