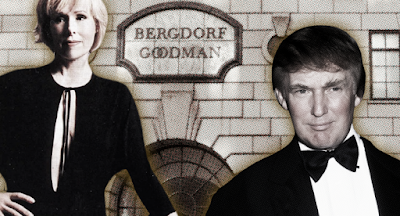 In the mid-1990s, when sexual predator Donald "Grab 'Em" Trump was grabbing women and worse, he allegedly raped journalist E. Jean Carroll in a dressing room in a New York department store. Trump repeatedly and publicly denied the attack on Carroll, defaming her character. She managed to save the dress she was wearing at the time of the attack, which she says has traces of Trump's semen on it. Carroll has tried to obtain a DNA sample from him in order to prove defamation (apparently, the statute of limitations has run out on rape in New York).

Trump's corrupt consigliere and his "Roy Cohn" William "Low" Barr inappropriately intervened in the case, claiming that Trump was a "Government employee" and therefore entitled be defended by the Justice Department. Today, Federal District Judge Lewis Kaplan rejected the delaying tactic by Barr and ordered Carroll's case against Trump to continue:

"Carroll sued Trump over that denial in New York in November [2019], and last month, the Justice Department moved the case to federal court and asked a judge to substitute the U.S. government as the defendant. The department argued Trump was 'acting within the scope of his office as President of the United States' when he disputed Carroll’s allegations.

The maneuver was a bid to short circuit the case. If the judge had done what the Justice Department asked, government lawyers could then have invoked the notion of 'sovereign immunity' — which prohibits lawsuits against the government — to end the case."

Given Trump's experience with using the legal system to avoid prosecution, this will likely be a long process. Even though he can't be prosecuted in the State of New York for rape, proof that he raped Carroll over two decades ago will further confirm his depraved character and pathological lying.