When not engaged in acting as an eager funnel for Russian intelligence smears of the Bidens, Trump "lawyer" and hatchet man Rudy "Rudy Colludey" Giuliani shows he can be conned by anyone appealing to his vanity, especially a young woman:

The reputation of Rudy Giuliani could be set for a further blow with the release of highly embarrassing footage in Sacha Baron Cohen’s follow-up to Borat.

In the film, released on Friday, the former New York mayor and current personal attorney to Donald Trump is seen reaching into his trousers and apparently touching his genitals while reclining on a bed in the presence of the actor playing Borat’s daughter, who is posing as a TV journalist.

Following an obsequious interview for a fake conservative news programme, the pair retreat at her suggestion for a drink to the bedroom of a hotel suite, which is rigged with concealed cameras.

After she removes his microphone, Giuliani, 76, can be seen lying back on the bed, fiddling with his untucked shirt and reaching into his trousers. They are then interrupted by Borat who runs in and says: “She’s 15. She’s too old for you.”

Even before he reaches into his trousers, Giuliani does not appear to acquit himself especially impressively during the encounter. Flattered and flirtatious, he drinks scotch, coughs, fails to socially distance and claims Trump’s speedy actions in the spring saved a million Americans from dying of Covid. He also agrees – in theory at least – to eat a bat with his interviewer.

Although unfortunate, the circumstances of the setup appear consensual, with Giuliani led to believe he was being courted. Bakalova, 24, is highly plausible in the sting, despite also having to pretend, for the benefit of viewers, to be a feral child posing as a far-right journalist.

"Courted."  Yes, a young woman would definitely want to "court" someone who is 76, clearly delusional and who looks like this -- 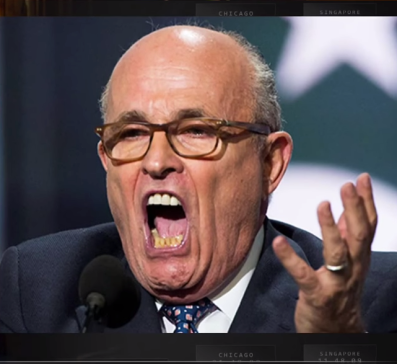 Russian intelligence hardly broke a sweat when they spoon fed garbage to this useful idiot.  But you have to say, he fits the profile of a depraved, inner circle Trumper. 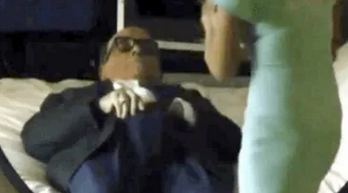 On what appear to be hidden cameras, we see Giuliani remove her microphone and ask for her phone number and address as he sits down on the bed. He starts patting her backside as she removes the microphone from his pants. Giuliani then lies down on the bed and starts sticking his hands down his pants in a seemingly suggestive manner. [snip]

The startled Giuliani, who had no reason to believe his interviewer was underage, sits up abruptly and gets out of there as fast as he can. “Rudy, Trump will be disappoint! You are leaving hotel without golden shower!” Borat yells after him.

If he would believe he was being "courted" by a 15-year-old, he'd believe the laptop story easily. Russian intelligence probably has an employee competition going on for who can come up with the most ridiculous plot and still have one of Trump's toadies swallow it.

Infidel -- Rudy would be a prime mark for an intelligence service, all right. He seems to have lost the plot some time ago.