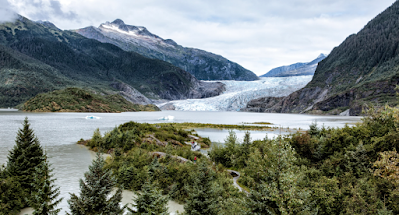 He's doing his damnedest to destroy every good thing while he still can:

President Trump will open up more than half of Alaska’s Tongass National Forest to logging and other forms of development, according to a notice posted Wednesday, stripping protections that had safeguarded one of the world’s largest intact temperate rainforests for nearly two decades.

As of Thursday, it will be legal for logging companies to build roads and cut and remove timber throughout more than 9.3 million acres of forest — featuring old-growth stands of red and yellow cedar, Sitka spruce and Western hemlock. The relatively pristine expanse is also home to plentiful salmon runs and imposing fjords. The decision, which will be published in the Federal Register, reverses protections President Bill Clinton put in place in 2001 and is one of the most sweeping public lands rollbacks Trump has enacted.

The new rule states that it will make “an additional 188,000 forested acres available for timber harvest,” mainly “old growth timber.”

For years, federal and academic scientists have identified Tongass as an ecological oasis that serves as a massive carbon sink while providing key habitat for wild Pacific salmon and trout, Sitka black-tailed deer and myriad other species. It boasts the highest density of brown bears in North America, and its trees — some of which are between 300 and 1,000 years old — absorb at least 8 percent of all the carbon stored in the entire Lower 48′s forests combined.

“While tropical rainforests are the lungs of the planet, the Tongass is the lungs of North America,” Dominick DellaSala, chief scientist with the Earth Island Institute’s Wild Heritage project, said in an interview. “It’s America’s last climate sanctuary.”

For even the most clueless among us who might have swallowed COVID Donnie's horseshit lie about being an"environmentalist," the blinding truth is now in sharper focus:  that this malignant, climate change denying regime is an enemy of the planet.  Not only did COVID Donnie pull the U.S. out of the Paris climate accord, his regime weakened greenhouse gas emissions standards, weakened protections of endangered species, promoted offshore oil and gas drilling, altogether rolling back 100 environmental rules.

Court challenges on many of these actions are underway or will follow.  But the best way to reverse this assault on our stewardship of at least our part of the planet is to kick this monster and his many Republican bootlicks out of office in the coming days.  It's only then that we can begin to repair the damage, though some of it may be already beyond fixing.

Poor Donnie. So many pockets to stuff, so little time.

Mart - he's on a mission to destroy.