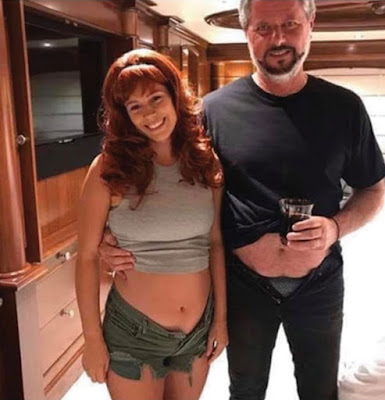 Fundie hypocrite (redundant, we know) and first-hand (no pun) observer of his wife's adultery Jerry "Fall Bad" Falwell, Jr. is suing his former employer, Liberty University, over his ouster by the school amid multiple scandals. Falwell, who watched while his wife and her young pool boy lover bumped nasties, filed his complaint in state court in Lynchburg, VA. Part of his complaint is typical faux-outrage we see so much of among far-right fundies:

"Mr. Falwell has suffered damage to his reputation, damage to his profession, humiliation, and anguish; lost business opportunities; and suffered other pecuniary damage."

"Damage to his reputation." Snort. We'd venture that Falwell accomplished that single-handedly (no pun) when he sat in the corner of his bedroom doing who knows what while watching his wife's sexytime. The complaint alleges that Falwell was subjected to "a malicious smear campaign incited by anti-evangelical forces," which included the Lincoln Project, despite the fact that the original, well-sourced story was published by Reuters (fundies gotta throw some hate at the opponents of their Golden Calf).

While Falwell, adhering to the money-grubbing prosperity gospel, didn't initially specify damages in his complaint, as a barometer, he claims to have been responsible for the school's $1.6 billion endowment. In retrospect, Falwell should have been more careful about his wife's attraction to the pool boy's endowment.

that Falwell was subjected to "a malicious smear campaign incited by anti-evangelical forces,"

They can consider it a little bit of payback for their own 1,700-year malicious smear campaign against gay people, pagans, non-subservient women, etc., etc., etc.

infidel -- Absolutely right. It's really the tiniest bit of payback, but we'll take it.