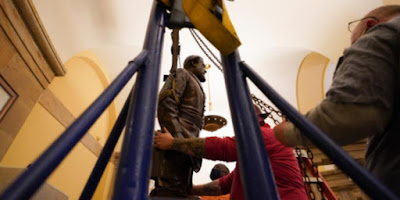 This morning, a reminder of the Old South's idolatry of its treasonous leaders was removed from the U.S. Capitol. The statue of Confederate Gen. Robert E. Lee will be relocated to a scrap foundry the Virginia Museum of History and Culture (to its "hall of traitors"?), following the recommendation by a commission of the Virginia General Assembly earlier this year, and approved by the Assembly.

Each State may have statues of two of its historic figures represented in the Capitol. Sen. Tim Kaine (D) and two of Virginia's congressional delegation were present for the removal, Rep. Jennifer Wexton (D) and Rep. Donald McEachin (D). In a joint statement, Wexton and McEachin said:

“The Robert E. Lee statue honors a legacy of division, oppression, and racism — a dark period in the history of our Commonwealth and our country. There is no reason his statue should be one of the two representing Virginia in the U.S. Capitol.”

The Virginia commission also recommended that the statue of Lee be replaced with one of Barbara Johns, a civil rights leader and a fitting replacement. As a student, filed a lawsuit opposing school segregation that was folded into the historic Brown v. Board of Education suit that struck down "separate but equal" segregation laws for schools. The Virginia General Assembly will vote on that in the next session.

We don't have statues of Benedict Arnold, Hermann Goering or Hideki Tojo in our public places, any more that we should have statues to people who fought to destroy the United States and defend the evil of slavery. It's long past time to deal with these monumental insults to our diverse nation.

(photo: Hoist him up and heave him out. Office of the Governor of Virginia)