My Pillow Crank Getting Sued (UPDATED) 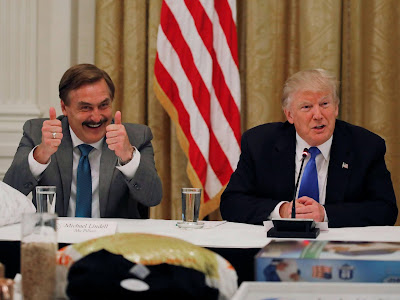 This rancid asshole is about to find out what accountability is:

Officials with Dominion Voting Systems have sent Mike Lindell, the C.E.O. of MyPillow, a legal letter warning of pending litigation over his baseless claims of widespread fraud involving their machines.

“You have positioned yourself as a prominent leader of the ongoing misinformation campaign,” the letter said, referring to his continued false claims that their systems were rigged by someone to effect the outcome.

“Litigation regarding these issues is imminent,” the letter said...

This really is going to be good. https://t.co/cOm2knu1FA

UPDATE:  Bed Bath and Beyond has dropped My Pillow from its stores.  Maybe they saw this --

BREAKING: @realMikeLindell and @MyPillowUSA are using the promo code “QANON” for discounts on products. @FBI designated QAnon supporters as “conspiracy theory-driven domestic extremists.” Supporters of QAnon were involved in the domestic terrorist attacks on the U.S. Capitol. pic.twitter.com/zx9P37cyLP

I'm not sure why it's taken so long.

Even Fox News, with all of their money and lawyers, should be afflicted with a constant swarm of lawsuits. Like a swarm of locusts.

I still think Pillowman is in it for the I love Trump buy my pillows grift; but then again he just may be a batshit crazy cultist.

Tim -- our sentiments, too.

Mart -- he's a Christo-fascist, from the same tree as fellow Minnesotan Michele Bachmann, but more loony, if that's conceivable.

So, that must be a My Pillow under donaldovitch's belt.