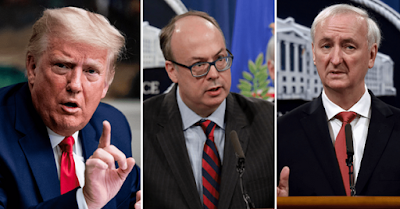 By now, you may have seen the report, first published in the New York Times, that a Justice Department official conspired with one- term loser Donald "Impeached Twice" Trump to overturn the election results in Georgia.  Here are some key grafs:

The Justice Department’s top leaders listened in stunned silence this month: One of their peers, they were told, had devised a plan with President Donald J. Trump to oust Jeffrey A. Rosen as acting attorney general and wield the department’s power to force Georgia state lawmakers to overturn its presidential election results.

The unassuming lawyer who worked on the plan, Jeffrey Clark, had been devising ways to cast doubt on the election results and to bolster Mr. Trump’s continuing legal battles and the pressure on Georgia politicians. Because Mr. Rosen had refused the president’s entreaties to carry out those plans, Mr. Trump was about to decide whether to fire Mr. Rosen and replace him with Mr. Clark.

Here's how it was conceived:

As December wore on, Mr. Clark mentioned to Mr. Rosen and Mr. Donoghue that he spent a lot of time reading on the internet — a comment that alarmed them because they inferred that he believed the unfounded conspiracy theory that Mr. Trump had won the election. Mr. Clark also told them that he wanted the department to hold a news conference announcing that it was investigating serious accusations of election fraud. Mr. Rosen and Mr. Donoghue rejected the proposal.

As Mr. Trump focused increasingly on Georgia, a state he lost narrowly to Mr. Biden, he complained to Justice Department leaders that the U.S. attorney in Atlanta, Byung J. Pak, was not trying to find evidence for false election claims pushed by Mr. Trump’s lawyer Rudolph W. Giuliani and others. Mr. Donoghue warned Mr. Pak that the president was now fixated on his office, and that it might not be tenable for him to continue to lead it, according to two people familiar with the conversation.

That conversation and Mr. Trump’s efforts to pressure Georgia’s Republican secretary of state to “find” him votes compelled Mr. Pak to abruptly resign this month.

Mr. Clark was also focused on Georgia. He drafted a letter that he wanted Mr. Rosen to send to Georgia state legislators that wrongly said that the Justice Department was investigating accusations of voter fraud in their state, and that they should move to void Mr. Biden’s win there.

Emboldened, Clark planned to have Trump remove Rosen and be named the new Acting Attorney General in order to carry out the voiding of the election results in Georgia.  When Rosen got wind of the maneuver, he demanded a meeting with Trump and Clark the evening of January 5:

Around 6 p.m., Mr. Rosen, Mr. Donoghue and Mr. Clark met at the White House with Mr. Trump, Mr. Cipollone, his deputy Patrick Philbin and other lawyers. Mr. Trump had Mr. Rosen and Mr. Clark present their arguments to him.

Mr. Cipollone advised the president not to fire Mr. Rosen and he reiterated, as he had for days, that he did not recommend sending the letter to Georgia lawmakers. Mr. Engel advised Mr. Trump that he and the department’s remaining top officials would resign if he fired Mr. Rosen, leaving Mr. Clark alone at the department.

Mr. Trump seemed somewhat swayed by the idea that firing Mr. Rosen would trigger not only chaos at the Justice Department, but also congressional investigations and possibly recriminations from other Republicans and distract attention from his efforts to overturn the election results.

The quintessential Trumpist weasel, Clark is now trying to deny what multiple sources have reported about his seditious actions, hiding behind legalisms about needing "sworn testimony" and attorney- client privilege.  If he's not fired immediately charged, there's no "justice."