Wingnut Schilling Strikes Out At Cooperstown 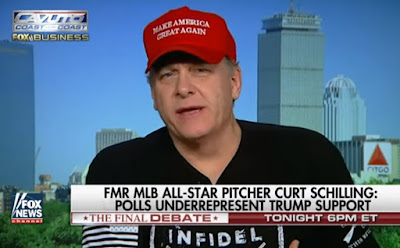 Former baseball pitcher and rabid, racist wingnut Curt Schilling was again rejected for induction into the Baseball Hall of Fame in Cooperstown, NY.  Schilling fell short of the 75% needed of baseball writers making up the Hall of Fame electorate, mostly due to "character" issues and his extreme positions on politics:

"The 54-year-old former pitcher, an outspoken backer of President Donald Trump, had been suspended from ESPN in 2016 for anti-Muslim remarks and was subsequently fired from the network for anti-transgender remarks. On Jan. 6, hours after the deadly riot at the Capitol, Schilling tweeted his support for it.

Voting for the Hall had already closed by then, though Schilling’s words sparked a late effort to allow some voters to withdraw their votes, something that the Hall rejected.  [snip]

On Jan. 6, Schilling sparked a new controversy by tweeting support of the riot at the Capitol: “You cowards sat on your hands, did nothing while liberal trash looted rioted and burned for air Jordan’s and big screens, sit back, stfu, and watch folks start a confrontation for shit that matters like rights, democracy and the end of govt corruption.”

Schilling doubled down on inflammatory rhetoric in the ensuing weeks. 'True evil and corruption enters the WH tomorrow,' he tweeted Jan. 19.

The Hall of Fame’s ballots stipulate that the candidates are supposed to display 'integrity' and 'character,' which some voters took as sufficient to disqualify Schilling."  (our emphasis)

Schilling also implied that the massacre of children at Marjory Stoneman Douglas H.S. in Parkland, FL, was the act of "crisis actors", something that should have resulted in his banishment from consideration earlier. Schilling has one more year of eligibility for Cooperstown, but has requested removal from the writers' ballot, something that should have happened years ago.