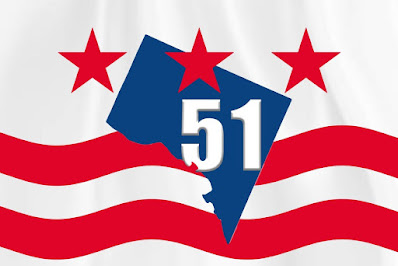 From CBS News/Data for Progress/Democracy for All 2021Action, statehood for the District of Columbia is more popular than ever:

As the House prepares to take up the issue this week of statehood for the District of Columbia, a new national poll finds that 54% of likely voters think D.C. should be a state, a record high level of support.

The poll, conducted by Data for Progress and the progressive advocacy coalition Democracy for All 2021 Action and shared first with CBS News, shows 74% of Democratic respondents approve of statehood for D.C., along with 34% of Republicans.

The poll found that clear majorities among likely voters in urban (57%) and suburban (56%) areas, as well as in swing states (57%), support D.C. statehood to allow for voting representation in Congress. About half of voters in rural areas of the country agree.

Statehood for the District of Columbia (with a bigger population than Vermont or Wyoming and whose residents pay more Federal taxes than citizens of 22 States) -- and, ultimately, Puerto Rico if the residents continue to approve -- must be a high priority for Democrats.  Besides likely adding to Democratic margins in the House and Senate, it also has the benefit of being the right thing to do:  enfranchising over 700,000 Americans.