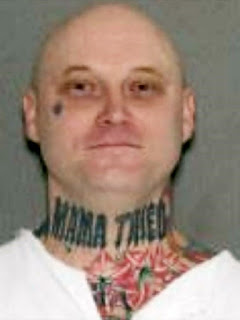 The round up of Trump's violent white supremacist insurrectionists from January 6 continues with the arrest of Tex-ass resident and habitual criminal Shane Jenkins. He's a doozy, too, emblematic of the criminal, nihilistic followers of neo-fascist demagogue and seditionist Donald "Mango Mussolini" Trump. Here's some reporting on the goon:

"Shane Jenkins, of Northwest Houston, was picked up at his home Friday morning after a tip led the FBI to several publicly available videos appearing to show the man smashing a U.S. Capitol window with the metal survival hatchet and throwing a flagpole and a metal pipe at federal officers, according to court documents.

Investigators say they also found social media accounts linked to Jenkins, where a video was uploaded by Jenkins himself at the riot. Someone in a red Nautica hat with tattoos allegedly matching Jenkins’, including the words “MAMA TRIED” across his neck, can also be seen in video footage captured by security cameras and body cams worn by Capitol police, according to court documents.

A parole officer, who had been assigned to Jenkins for several years, reportedly identified Jenkins for authorities using publicly posted photographs.

Nothing like filming your crime, dumbass. And as far as "mama tried," leave Merle Haggard out of this. You did this on your own, loser, with a big assist from your cowardly Dear Leader. Refusing to take responsibility is a Trump value.

Please take time to review the many seditionist insurrectionists that tried to take down our democracy at fbi.gov, and if you see someone familiar, report them.