Ahead Of WH Meeting, Republicans Lie About Infrastructure Plan 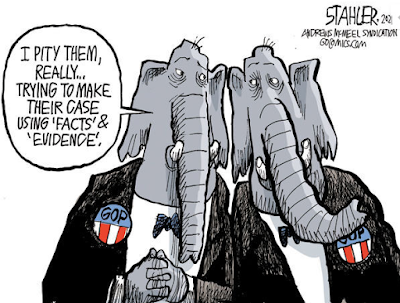 Ahead of a meeting today at the White House with House and Senate Republicans to discuss the Biden Administration's infrastructure plan, a show of continuing, malicious Republican bad faith:

Senate Republicans have reportedly sent around a memo calling President Biden’s ambitious infrastructure package a “slush fund,” ahead of a bipartisan meeting with the president at the White House on Monday.

Politico reports that the memo sent by the Senate Republican Conference to all GOP communications staffs blasts the White House for referring to the infrastructure proposal as a “jobs plan” and instead called it a “partisan plan to kill jobs and create slush funds on the taxpayer dime.”

“Biden’s Partisan, Job-Crushing Slush Fund spends just 5% of the total $2.7 trillion on roads and bridges,” the lawmakers said in their memo, according to Politico.

“The rest is: a wish list of non-infrastructure spending on failed Obama policies; a dog’s breakfast of slush funds for Democrats’ pet projects without any accountability or transparency; expensive green energy mandates on Americans; a ban on the right to work; and a flurry of tax hikes that will to drive companies out of the U.S. and give China and Russia a say in the United States’ tax laws. As a result, the plan will eliminate at least 1 million jobs," they added.

(Spoiler alert) Bullshit!  Not (shockingly!) the wished- for Golden Muffin of bipartisanship! sought after by certain posturing Dems and cynical Republicans.

The phony narrative that only roads and bridges are "infrastructure," plus the absurd notion that a $2 trillion plan is a job- killer, plus addressing climate change for the first time in 4 years is an "expensive green energy mandate," plus the notion that raising the top corporate tax rate to less than where it was before the incompetent former guy came in and tanked the economy -- it's all just more of the same lying, gaslighting Republican talking points, endlessly recycled.  If it weren't for bad faith, Republicans would have no faith at all.

On the last point, for some perspective, here's what happened when President Clinton pegged the top corporate rate to 35%  -- not the 28% Biden's proposing (our emphasis):

On Aug. 10, 1993, President Bill Clinton signed into law the Omnibus Budget Reconciliation Act, which created four new corporate tax brackets with increased rates for businesses with incomes over $335,000. [28] Vice President Al Gore, in a statement hailing the bill’s passage, said “[This bill] means jobs, growth, tax fairness… It’s a message of hope to the small business owner and 96% of all small businesses who will get a tax cut under this plan.” [39] The bill was attacked by United States Chamber of Commerce President Richard Lesher, who said that the corporate tax increases would “slow economic growth and fuel inflation…” and that “foreign competitors would gain an economic advantage over American goods here and abroad.” [40] A group of 300 major corporations and trade associations known as the Tax Reform Action Coalition said it “strongly opposed Mr. Clinton’s move to increase the top rates for… corporate taxes.” [40] From the passage of the bill until the end of Clinton’s term, the US economy gained more than 21.4 million jobs, the unemployment rate fell from 6.8% to 3.9%, industrial production rose by 5.6% per year, and the Dow Jones Industrial average rose 26.7% per year.

So, raising the top corporate tax rate to a much higher level in 1993 led to... eight years of job growth, rising industrial production and a booming Dow Jones.  Sounds awful!

Raising taxes also balanced the budget to a point where Bush mailed "rebate" checks up to $1200 to families with his name on it; as Clinton had overcharged us. So much for rainy day or Iraq war funds.