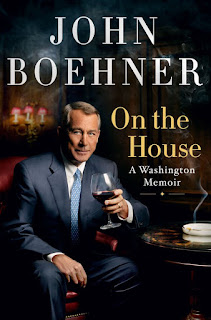 Former Speaker of the House and man always on the verge of weeping John "It's Not Pronounced Boner" Boehner has a new book out, "On The House," in which he settles some old scores that he should have settled when he was in power. Here's his take on accused sex trafficker Matt Gaetz's wingman and sexual abuse cover up guy Rep. "Gym" Jordan (Seditionist-OH), from CBS Sunday Morning:

"CBS Correspondent John Dickerson: 'You call some of these members political terrorists.'

Boehner: 'Oh, yeah, Jim Jordan especially, my colleague from Ohio. I just never saw a guy who spent more time tearing things apart and never building anything, never putting anything together.'”  (our emphasis)

While he has Jordan pegged, it's a little rich for Boehner to talk about never building anything. We recall him yelling "Hell no you can't" on the House floor, an epic example of bad faith regarding the Affordable Care Act that he tried mightily to block from passage for two years, while offering no alternative and complaining about lack of cooperation from Dems. He presided over the 2010 right-wing Tea Party takeover of Congress, and was happy to ride the wave that eventually brought a malignant narcissist and lying con man from New York City to the White House in 2016. But thanks for the memories.

(photo: Cover of Boehner's score-settling book. He loves his wine and cigarettes.)

Fuck this guy. Dancing with the Stars doesn't erase a career of drinking on the job, then driving the country into a tree. Just because he sees assholes all around him now, doesn't mean he isn't the queen bee.

As previously noted. Fuck this guy.