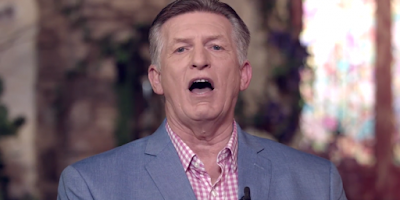 If you want to get a glimpse of the insane Christofascist underbelly of the United States, there's no better exemplar than the weird anti-Semitic kook and pro-Russian nutjob Rick "The End Is Near" Wiles. Wiles has a streaming, screaming, steaming shitpile of a program called "TruNews" (which is anything but) that he uses to spew anti-Semitic, far right, white supremacist conspiracy theories and praise of Putin's Russia. His broadcasts could have originated in Nazi Germany for all of their bile and depravity. He was banned from YouTube for hate speech, while his "TruNews" got press credentials from the Trump White (Supremacist) House.

Here's his recent take, via Right Wing News, on the U.S.'s decision to send naval forces into the Black Sea to send Russia a message about trying to overthrow Ukraine (and other eastern European nations):

That's some heavy dose of crazy Nazism, with some blood libel, "deep state" asshattery and strange Czarist love thrown in. We suspect you could have a more rational conversation with someone committed to a mental institution. He wraps up his jeremiad this way:

"...There’s nobody else attacking me. Zionists. It’s not every Jewish person, it’s the Zionists, it’s the satanic Zionists. They are satanic. Old Henry Kissinger is one of them, old Alan Greenspan is one of them. Who has weakened America? Greenspan and Kissinger. Now they want war with Russia because the Russian people got free of their chains and bondage and returned to Christ. That’s what it’s about. The Russian people returned to Christ.”  (our emphasis)

Yes, when we think of Russia, we think of that Christ-like figure Vladimir Putin: peaceful, eschewing wealth and power, honest and forthcoming. Loving his neighbors in particular. As his fervent disciple, Wiles should sit at the Russian thug's feet and absorb his teachings, including how to manipulate America's useful idiots.

(photo: Wiles in the midst of uncorking another libel)