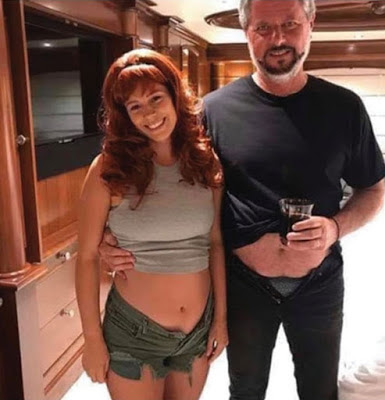 As ardent fans of Bible-banging swinger Jerry "Fell Badly" Falwell Jr.'s humiliation, it would be remiss of us not to note that he's being sued by his former family enterprise, Liberty "University" for a hefty $40 million in damages, according to the New York Times. The suit stems from the scandal he and his wife Becki caused when they engaged a young, former pool attendant in a years-long affair, with Becki and the pool attendant bumping nasties while Jerry reportedly "watched" from the corner of the room. For an institution that is as fundamentalist as they come, it was a bit much for their leader -- and son of their founder -- to be shown up as a perv:

"The suit, which was filed on Thursday and asks for more than $40 million in damages, alleges breach of contract and fiduciary duty. It claims that Mr. Falwell withheld scandalous and potentially damaging information from Liberty’s board of trustees, while negotiating a generous new contract for himself in 2019 under false pretenses. Mr. Falwell also failed to disclose and address 'his personal impairment by alcohol,' the suit alleges.

In August, Mr. Falwell claimed that he was being threatened with extortion by a man who had a yearslong sexual relationship with Mr. Falwell’s wife, Becki. The suit claims that by keeping the sexual entanglement and resulting 'extortion' a secret, Mr. Falwell endangered and later damaged Liberty’s reputation. Instead of divulging the active threat to Liberty’s board, 'Falwell Jr. chose personal protection,' the suit claims."  (our emphasis)

The suit also notes the photo from last year (above) of Falwell and a university staffer on board a yacht, where both have their pants unbuttoned and Falwell has his arm around her while appearing to hold a glass of booze. But, as his evangelical followers' own "golden calf" would say, when you're a star they let you do it...you can do anything, grab 'em...