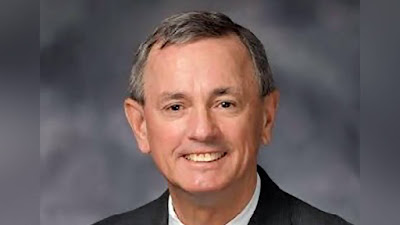 Our Republican crime blotter today has Missouri (the "Show Me" state!) on its radar today, with some allegations that low- IQAnon sleuths should definitely look into (even though the accused isn't Hillary Clinton or Joe Biden, or any Democrat for that matter):

Roeber, who ran to replace his deceased wife in the state House in 2020, was embroiled in controversy when his adult children came forward during the election with graphic details of physical and sexual assault at his hands. He was elected anyway, but his children made a plea to now-GOP state House Speaker Rob Vescovo to prevent him from being seated. Roeber was banned from the GOP House caucus pending an ethics investigation.

According to the report, Roeber did not cite the assault and molestation allegations as the reason for his departure.

"He said he needs to move out of state to be closer to family and cited that as the reason for his departure from the Legislature," reported Summer Ballentine. "He also said he has accomplished his only legislative goals: voting on education bills and memorializing his late wife, former Republican Rep. Rebecca Roeber."  (our emphasis)

"He was elected anyway... "  Those Republicans in Missouri are certainly a tolerant bunch, as long as the candidate has an "R" by his/her name on the ballot. (Note to Matt Gaetz:  you may have a future in Missouri Republican politics!)  We're also reminded of this:

This controversy comes as former Missouri Gov. Eric Greitens, forced to resign over allegations of sexual assault and blackmailing a mistress, is mounting an attempted political comeback with a run for Senate.

Show us some more, Missouri Republicans!