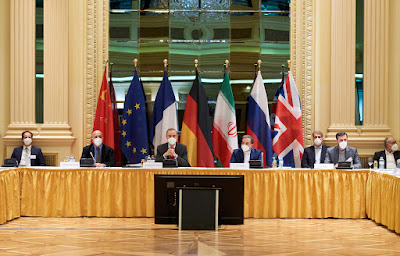 When the maliciously destructive "former guy" withdrew the U.S. from the multinational Joint Comprehensive Plan of Action (JCPOA) on curbing Iran's nuclear weapons program, years of careful negotiation were scuttled and Iran returned to its nuclear development activities. Reports out of Vienna where representatives of the seven countries involved in the JCPOA suggest that proposals have been drafted to bring Iran and the U.S. back into compliance with the agreement, with a meeting today of the Commission which oversees the agreement.

Despite President Biden's expressed desire to restart the JCPOA, his Administration will be under pressure from right-wing politicians here and in Israel not to rejoin the JCPOA. When the Senate was scheduled to take up the agreement in 2015, Likudnik hothead Israeli Prime Minister Bibi "Bomb Bomb" Netanyahu took the unprecedented step of openly lobbying against it in the U.S., a slap at President Obama. They've taken a different, more ominous route this time to scuttle the agreement:

"Negotiations that began last month toward that goal were interrupted by an attack on Iran’s Natanz nuclear facility widely believed to have been launched by Israel, which has opposed the United States rejoining the deal. The Biden administration said it had no involvement in the attack.

In response, Iran escalated its steady violation of the terms of the agreement, saying it would begin enriching uranium to 60 percent, far beyond the original 3.67 percent allowed under the JCPOA and much closer to the level required to fuel a nuclear weapon.

But since the talks resumed last week, Iranian nuclear negotiator Abbas Araqchi said, participants have 'had good discussions' on the reports submitted by working groups. 'It seems that a new understanding is emerging and there is now common ground among all on the final goal,' he said."  (our emphasis)

Collateral damage was done when the U.S. pulled out of the agreement, undermining foreign nations' confidence in the U.S. adhering to the treaties it signs. It may take a generation to repair that damage, but a strong JCPOA which peacefully restrains Iran's nuclear ambitions would be a positive step.