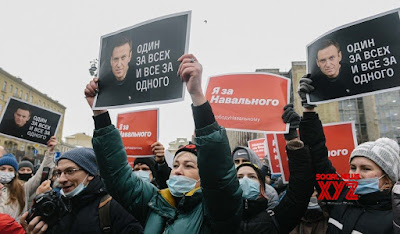 Today, thousands demonstrated across Russia demanding freedom for political prisoners and chiefly for Alexi Navalny, corrupt Russian thug Vladimir Putin's major political opponent, who is reportedly in grave condition in a Russian prison hospital. At least 113* demonstrators were detained by Putin's security service, including top Navalny aide Lybov Sobol and a press aide Kira Yarmysh. The Putin regime had declared demonstrations unlawful, yet despite that, a good number defied the restriction and held demonstrations in some 100 Russian cities and towns.

Anti-corruption critics of Putin see an existential threat looming for their movement, as the Russian autocrat intends to declare Navalny's movement "extremist," allowing even harsher crackdowns:

'"Navalny’s aides had described the rallies as the 'final battle between good and neutrality” – a play on the title of the Livejournal blog on which Navalny built his political career.

'It seems to us that we’ve indeed reached the point of massive repressions,' Ivan Zhdanov, the head of Navalny’s Anti-Corruption Foundation, told the news outlet Current Time. 'If we’re recognised as an extremist organisations, it will become far harder to engage in legal, open activity.'

Police cracked down harshly on pro-Navalny protests earlier this year, detaining more than 5,000 people in a single day. Supporters on Wednesday said they were prepared for a crackdown.

'I don’t think anything can change [Putin’s] mind, but I feel a debt [to go],' said Anna Sinitsina, a designer. 'In the worst case I can face an arrest, I can take some time away, and I don’t have a boss or someone who can punish me. Everyone I know knows how I feel about this, they expect me to be there.'”  (our emphasis)

Every civilized nation needs to line up in opposition to Putin's repression and make him pay for this Stalinist behavior. Putin once lamented the collapse of the Soviet Union, as a former KGB officer would be expected to do. He needs to understand that his dream of a new version of the Soviet Union is not going to happen.

* Later reports indicate at least 1,500 have been arrested.

At least the Soviets "built up the country".

bt1138 -- Putin's operating mode is like that of an organized crime boss, receiving a cut from every of his capo's criminal activities, in his case a cut from each of his network of oligarchs.