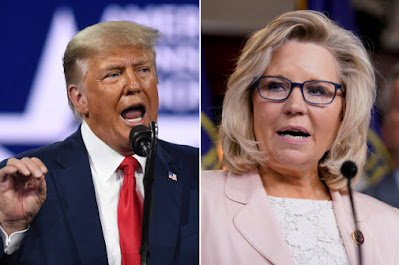 It's not often that you see a politician deliver their political suicide note in public view -- and without the background of a sex scandal, etc. -- but Wyoming Representative and paleoconservative Liz Cheney doubled down on her tweet earlier Monday that said the 2020 election was NOT stolen. She was interviewed Monday afternoon by former House Speaker, right-wing answer man, and guy in undisclosed location Paul Ryan before a group of donors and Rethuglican operatives at an American Enterprise Institute retreat, saying:

"We can't embrace the notion the election is stolen. It's a poison in the bloodstream of our democracy. We can't whitewash what happened on January 6 or perpetuate Trump's big lie. It is a threat to democracy. What he did on January 6 is a line that cannot be crossed."

Sadly for Rep. Cheney, the Trumpist White Supremacist Party is all too willing to cross the line represented by the January 6 insurrection for their Dear Leader, including gaslighting it and continuing to put out false narratives about a "stolen election." Their dangerously delusional and violent base will certainly repeat the episode if given the opportunity, not only at the U.S. Capitol but at state capitols across the country when elections don't go their way. Sadly also for Cheney is that the "men" in her party have given their cojones to the Former Guy, who's doing pathetic stand-up routines about the election that HE LOST over six months ago. And they say they're not in favor of sex assignment procedures....

and without the background of a sex scandal

But there's a sanity scandal, which in this context is worse. Republicans will not tolerate sane people among their ranks. Not any more.

Infidel -- How true. They have to subscribe to the crazy or be expelled from the tribe that's led by a sociopathic narcissist and habitual liar. It's cult behavior and it's a danger to the rest of us.