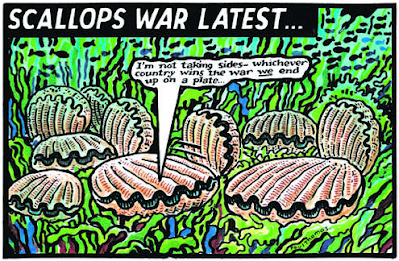 Do you remember the conflict between the UK and France that was dubbed "The Great Scallop War" back in 2018? Neither do we.

However, it seems that the two NATO allies are at it again over shellfish harvesting rights around the British Crown Dependency Jersey Islands 14 miles off the French coast. Jersey officials want harvesters off their shores to employ modern equipment and to document that they're familiar with the waters from past harvesting. French fisherman are saying "Non," and each nation has sent military ships to the scene to "monitor" the situation:

"The French fisherfolk threatened to 'blockade' the harbor, and they did stop cargo ships for a few hours from entering or exiting. In one scene captured on video, a French boat also could be seen ramming another vessel.

But by Thursday afternoon, the French had retreated, after a meeting between Jersey fisheries authorities and representatives of the French fleet.

In the early hours, no one was certain how the day would go. Josh Dearing, owner of the Jersey Catch fishing company, told the Press Association: 'I looked from the shore this morning and it was just like a sea of red lights and flares already going off at sea. It was like an invasion.'”

The French Minister of the Sea reminded the Jersey fishermen that France may cut off the electricity to Jersey via an underwater cable, which seems like a disproportionate escalation, n'est-ce pas? It didn't help that there are still bruised feelings between the UK and France / European Union) over Brexit, where fishing rights were a big kahuna for both parties in negotiations.

We hope that the waters can be calmed. Neither side should bait the other while the negotiators are fishing for a solution. We're starting to flounder, so we'll leave it there.

BONUS:  Here's the vid referenced above --

A French boat has been spotted ramming a British vessel in Jersey waters.