Tracking Down The Insurrectionists: Another Floriduh Man 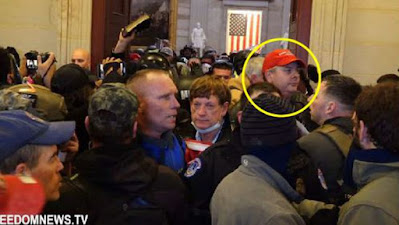 He thinks he did nothing wrong and is bragging about it, poor sucker:

A Chuluota man who bragged on social media about being inside the U.S. Capitol during the Jan. 6 riot was arrested Monday, adding to the growing list of Central Florida residents involved in the deadly ordeal, according to the U.S. Attorney’s Office for the Middle District of Florida.

“You know I was there, right?” Nassif wrote on Jan. 8, the affidavit said. “You don’t find it odd that police officer is welcoming everybody in? Considering the narrative that’s being pushed?” [snip]

Nassif is facing charges of entering a restricted building or grounds and violent entry or disorderly conduct. If convicted, he faces up to one year in prison, a year of probation and a $100,000 fine. He had a hearing Monday afternoon at the federal courthouse in downtown Orlando.

Nassif was the only person not wearing a mask in court. The judge OK’d Nassif’s request not to have his face covered because his lawyer — masked up — was sitting closest to him and was fine with it.

Before the hearing began, Nassif swiveled in his chair from side to side, wearing a faded black T-shirt, gray shorts and brown work boots.

He seems to have problems with critical thinking (our emphasis):

A review of Nassif’s Facebook page also shows memes and news stories that say the riot was organized by left-wing groups such as Antifa.

He also posted news stories about anti-mask and lockdown mandates and another claiming the Centers for Disease Control and Prevention inflated COVID-19 deaths by 1600 percent. Multiple posts he shared were flagged for spreading false or misleading information.

Seems nice and completely in character with a MAGA man.

In other words, a dimbulb worthy of the chant, "Lock him up, lock him up!"