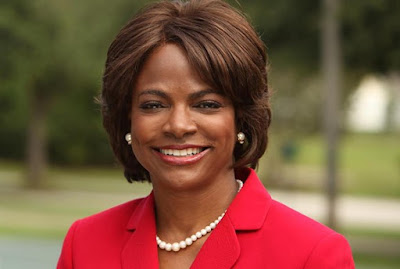 A strong candidate that could give Democrats a decent chance to defeat Trump- enabling, Bible- quoting Florida Sen. Marco "Little Marco" Rubio in 2022 is entering the race:

Democratic Rep. Val Demings of Florida plans to run for the U.S. Senate in a bid to unseat Sen. Marco Rubio (R-Fla.), who is up for reelection in 2022, Politico and NBC News first reported Tuesday.

An adviser to Demings confirmed to HuffPost that she is planning a Senate bid and would make a formal announcement shortly.

Demings, 64, had been weighing whether to enter the state’s gubernatorial race, but ultimately decided she could be most effective in the Senate, Politico reported, citing Democrats who are familiar with her thinking.  [snip]

Demings was first elected to the House in 2016 to represent Florida’s 10th Congressional District, which includes a large portion of Orlando. She was previously the city’s chief of police ― the first Black woman to hold that position. She gained national attention last year for her role in then-President Donald Trump’s first impeachment trial, in which she served on the House panel that charged him with misconduct.

If you saw the second impeachment trial of the former guy, you'd likely agree that Demings stood out as one of the strongest and most persuasive advocates for conviction.  She's the real deal.  Retiring the little gusano that a credulous TIME magazine once dubbed the "the Republican savior" would be a satisfying end to an empty suit who fancies himself presidential timber, but is really just your run- of- the- mill Republican careerist weasel.