Mega-Wealthy: Taxes Are For Thee, Not For Me 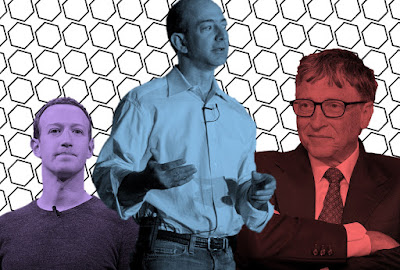 ProPublica today released a fascinating and infuriating analysis of the taxes that 25 of the wealthiest Americans pay, and you won't be surprised to know that it's a paltry sum at best. The story of how they manage to avoid paying their fair share in taxes centers in large part around the way they accumulate wealth. Average Americans' main source of income is a salary, wage, or an annuity. Most live paycheck to paycheck and are only able to save or invest a nominal amount of that income.

The wealth of the top billionaires grows through increases in the value of stocks, property and other assets, and those assets aren't taxed until they are sold (capital gains):

"To capture the financial reality of the richest Americans, ProPublica undertook an analysis that has never been done before. We compared how much in taxes the 25 richest Americans paid each year to how much Forbes estimated their wealth grew in that same time period.

We’re going to call this their true tax rate.

The results are stark. According to Forbes, those 25 people saw their worth rise a collective $401 billion from 2014 to 2018. They paid a total of $13.6 billion in federal income taxes in those five years, the IRS data shows. That’s a staggering sum, but it amounts to a true tax rate of only 3.4%."  (our emphasis)

"No one among the 25 wealthiest avoided as much tax as [Berkshire Hathaway's Warren] Buffett, the grandfatherly centibillionaire. That’s perhaps surprising, given his public stance as an advocate of higher taxes for the rich. According to Forbes, his riches rose $24.3 billion between 2014 and 2018. Over those years, the data shows, Buffett reported paying $23.7 million in taxes.

That's just one element of a tax code that's skewed to the ultra-wealthy. There are the arcane tax loopholes that the wealthiest take advantage of, thanks to their coin-operated Congressmen who write the tax laws and take campaign contributions.

In the months ahead, ProPublica says that they will look into how the ultra-wealthy avoid paying their fair share in taxes through a variety of legal mechanisms. Legal but nonetheless inequitable.