Monuments To Treason Coming Down In Charlottesville 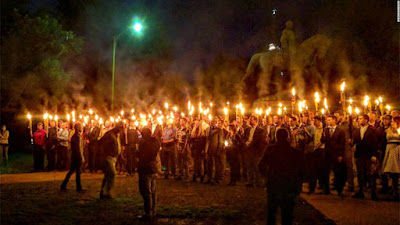 A symbol of the racist, treasonous Confederacy, as well as the rallying point for the deadly 2017 white supremacist riot in Charlottesville, VA, is finally coming down by order of the Charlottesville City Council last night. The statue of Gen. Robert E. Lee will be removed from the park in the city that was the scene of violent KKK and other white racists clashes with protesters. In addition, the statue of Confederate Gen. Stonewall Jackson will also be removed from another park by order of the City Council. Both sites were rallying points for KKK and other white supremacist groups.

The Virginia State Supreme Court cleared the way a few weeks ago for Charlottesville to remove the racist statues, which were erected during a period a century ago when Jim Crow laws were passed and bigots in the South erected them to intimidate African-Americans and enforce segregation.

Following the deadly riot in which a white supremacist drove his car into a crowd of anti-white supremacist demonstrators killing Heather Heyer, the "former guy" infamously commented that there were "very fine people on both sides" of the conflict. President Biden has said it was that comment that convinced him to run in 2020.

I recently came across an awesome Civil War memorial statue at HBCU Lincoln Universty in Jefferson City, MO. The University was "founded by the veterans of the 62nd and 65th U. S. Colored Infantry in 1866 to educate blacks after the Civil War" Great backstory and statue pics here:
http://www.edprotzel.com/blog/2017/8/29/a-civil-war-monument-worth-saluting-lincoln-universitys-soldiers-memorial-plaza

Mart -- Thank you for the link. You're absolutely right: statues for heroes, not traitors.