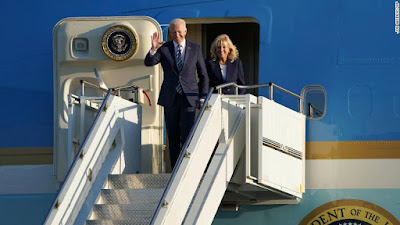 Ever the narcissistic sociopath, the "former guy" liked to boast about how the U.S. was "respected" when he occupied the Oval Office. In reality (something he's not familiar with), friend and foe alike knew how to play him by overindulging his grandiose self-regard with the military parades and sword dances and naming towns after him, making him feel like the king he thought he was. When he wasn't around, he was mocked by them.

In a survey released today by the Pew Research Center, it's clear that the former guy's departure has lifted the image of the U.S. abroad significantly. Here are some excerpts from the survey:

"The election of Joe Biden as president has led to a dramatic shift in America’s international image. Throughout Donald Trump’s presidency, publics around the world held the United States in low regard, with most opposed to his foreign policies. This was especially true among key American allies and partners. Now, a new Pew Research Center survey of 16 publics finds a significant uptick in ratings for the U.S., with strong support for Biden and several of his major policy initiatives.

In each of the 16 publics surveyed, more than six-in-ten say they have confidence in Biden to do the right thing in world affairs. Looking at 12 nations surveyed both this year and in 2020, a median of 75% express confidence in Biden, compared with 17% for Trump last year."  [snip]

When Barack Obama took office in 2009, ratings improved in many nations compared with where they had been during George W. Bush’s administration, and when Trump entered the White House in 2017, ratings declined sharply. This year, U.S. favorability is up again: Whereas a median of just 34% across 12 nations had a favorable overall opinion of the U.S. last year, a median of 62% now hold this view."  (our emphasis)

Some of the greatest damage the former guy did to our standing in the world was over our reliability as a trusted partner, withdrawing from international pacts like the Iran nuclear deal and the Paris Climate Accords, and our approach to combating the pandemic. Interestingly, the two other world leaders that shared the lowest favorability scores with him were Russian thug Vladimir Putin and Chinese dictator Xi Jinping, according to the survey, which is right where he belongs.

(photo: President Biden and the First Lady arrived yesterday in the UK for the G7 summit)

Posted by Hackwhackers at 1:30 PM