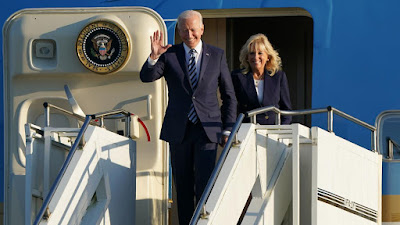 "Whether a man is burdened by power or enjoys power; whether he is trapped by responsibility or made free by it; whether he is moved by other people and outer forces or moves them -- this is of the essence of leadership." -- Theodore H. White, "The Making of the President 1960"

The G7 summit in Cornwall, UK wraps up today and whatever joint statement comes out of it, one thing is clear: the atmosphere of solidarity and common purpose was in large part due to President Biden's presence and authority. Offended by the go-it-alone, pro-Russian and dismissive approach of Biden's predecessor, our allies have a stable and experienced U.S. President to rally around as democracies face new threats from authoritarian forces. The genuine smiles, embraces and sincere words of praise offered by our allies for President Biden were in stark contrast to the past four years.

(photo: President Biden and the First Lady arrive in the UK for the G7 summit)