Time To Drop The Hammer On Weisselberg 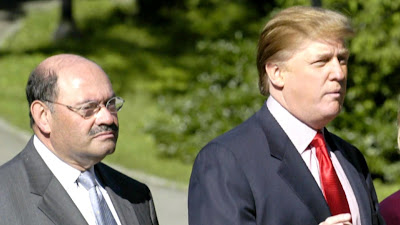 For months, the Manhattan District Attorney's office has been investigating Trump Organization Chief Financial Officer Alan Weisselberg regarding the Organization's potentially illegal business dealings. Investigators are looking into allegations that cheat and pathological liar Donald "Loser" Trump manipulated business data when applying for loans, inflating asset values to secure loans, while devaluating those same assets when paying taxes. There's also suspicion that Trump and his staff knew that foreign money was being laundered through his condominiums and other properties, although that's harder to substantiate than bank, mail and tax fraud.

Weisselberg is key to tying Trump to fraudulent business activities, as financial decisions and actions went through him. Two years ago, former Trump fixer and lawyer Michael Cohen identified Weisselberg as the key financial officer through whom payments (including the hush money payment to Stormy Daniels) flowed.

The WaPo is reporting that Weisselberg is showing no sign of fully cooperating with the District Attorney's investigation, despite pressure being placed on him by investigations into his son who is employed by the Trump Organization. Their report indicates that Weisselberg may be in regular contact with Trump, likely in order to coordinate their stories (ed. -- obstruction of justice much?):

"As the investigation proceeds, Trump has returned to New York on several Sunday evenings from his golf club in New Jersey, where he typically spends the summer. On Trump’s birthday, hours after the former president had arrived at the building where he has a home and office, Weisselberg left his apartment and arrived at Trump Tower about 40 minutes later.

Early Tuesday, Weisselberg, wearing a suit and carrying a briefcase, again came out of his apartment building, but pivoted back inside when he saw a reporter outside."

Not sketchy behavior at all. Whether Weisselberg believes Trump will "save" him from prison or he believes in future rewards for taking a fall for Trump outweigh his conviction, he may be in for a rude awakening. Nonetheless, it's time for the Manhattan District Attorney's office to end Weisselberg's bob and weave and charge him based on the evidence they have.